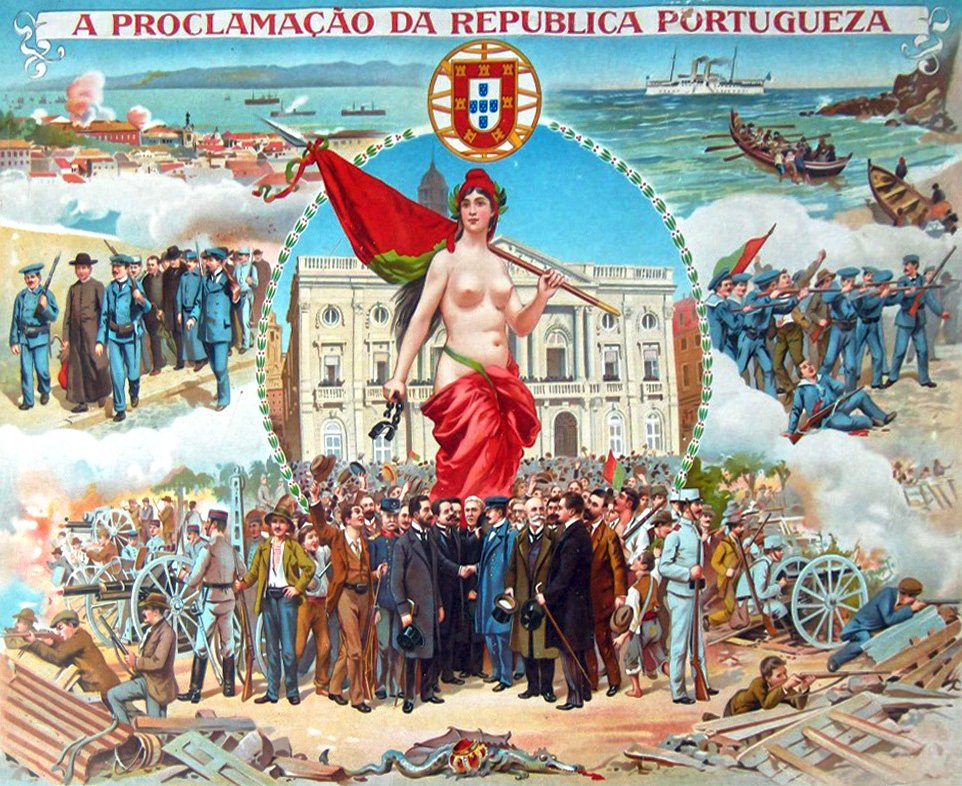 At 11:00 am October 5 1910, from the balcony of Paços do Concelho, in Lisbon, the Portuguese Republic was proclaimed.

At 11h on October 5, 1910, from the balcony of Paços do Concelho in Lisbon, the Portuguese Republic was proclaimed, after more than 700 years of constitutional monarchy and two days of struggle during which the Portuguese military was reluctant to counter the advances of the revolutionaries. A provisional government was appointed, headed by Teófilo Braga, and in 1911, the new Constitution was approved and the first President, Manuel de Arriaga, elected, thus beginning the period historically designated: The First Republic. 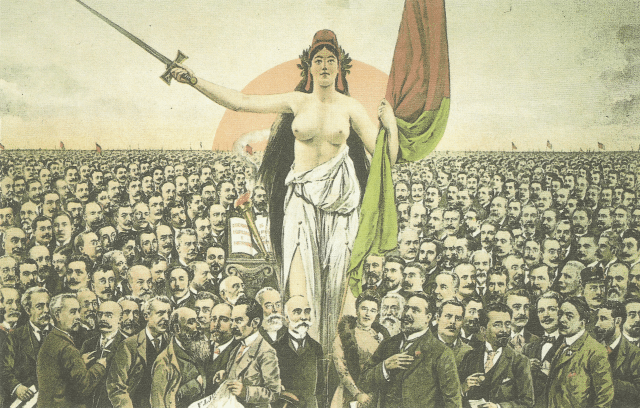 The advent of the Portuguese Republic brought with it renewed symbols: the flag, the adoption of A Portuguesa as national anthem (As armas! As armas!), and the use of the symbolic bare-chested bust, whose features were inspired by Ilda Pulga and later graced the face of the Portuguese escudo. Little known fact, this muse for the face of the republic died in 1993 at the age of 101.

Hopes were high among the new republican leadership for the changes ahead even though the formerly promising economy was failing due to the decision to join the Allies in WWI, but it didn’t last long. After the war ended there were serious disagreements among the republicans and unions led strikes that were ultimately repressed, giving the republic a sour reputation as Europe’s most unstable regime. It was described by many as a country with continual anarchy, rioting, assassinations, religious persecution, and arbitrary imprisonment. Over the course of the First Republic’s 16 years of existence, there were 45 changes of government, often resulting from military intervention, and growing corruption to boot.

The demise of the First Republic finally came about in 1926 with the military coup that ultimately led, in 1928, to the appointment of António de Oliveira Salazar as finance minister, who rose up through the ranks to become prime minister, or dictator, whichever you prefer, in 1932. He held this post for the next 36 years and declared the Estado Novo regime, with its own constitution.

In 2017, Portugal will mark the day a holiday for the second consecutive year, after its interruption between 2012 and 2015, due to a strange economics-based agreement between the Portuguese government and the Vatican during the governance of Passos Coelho to reduce the number of public holidays. The Holy See wasn’t just focusing on civil holidays, by the way, as Corpo Santo was also on the chopping block.

So here we are, preparing to celebrate the day of the founding of, yes, a failed republic, but remind yourself that não há bela sem senão (literally: you can’t have beauty without an if, but we would say you can’t make an omelette without breaking a few eggs). Basically, however you decide to remember today, you have every right to make a mess doing it. Atlas recommends attending the concert commemorating the 45-year career of Jorge Palma with Orquestra Clássica do Centro, at Coliseu dos Recreios at 21h30, but please behave during the performance.