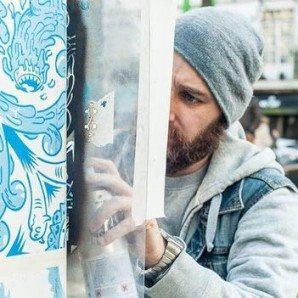 Add Fuel's work can be found on the obvious walls and road divider canvasses, but also on wooden panels, his signature tiles, scarves for Mulhouse tourism, decks and snowboards, and a program for the Teatro Nacional in Lisbon. 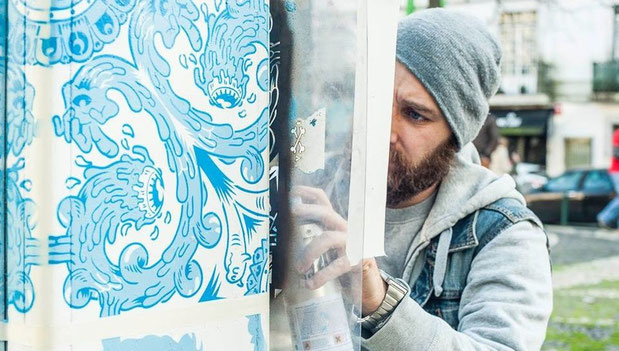 Atlas was taking a stroll down Rua São Paulo and was delighted to find a new work by Diogo Machado, (aka Add Fuel) right there on an electrical box.

Based on the Portuguese azulejo patterns but with “fuel,” as Machado calls it, the stenciled and spray-painted design seemingly peels off the box to expose the structure behind.

This return to tradition but with a twist is typical of his work and what has garnered Add Fuel a following among the street-art-loving Lisboetas and visitors, as well as by Lisbon’s UnderDogs gallery curated by Alexandre Farto (Vhils) and Pauline Foessel.

Add Fuel’s work, while targeted in theme, is varied in color and medium. It can be found on the obvious walls and road divider canvasses, but Machado didn’t stop there. He expanded to wooden panels, his signature tiles, scarves for Mulhouse tourism, decks and snowboards, a program for the Teatro Nacional in Lisbon, and now an electrical box. His lack of fear in trying new things is what makes Atlas so excited – it’s what drove us to track him down and pick his brain a bit.

Atlas correspondent Jess asked Add Fuel about his inspiration, the places where he would never put a stencil, and advice to a kid with a can of spray
paint.

How did you come up with the concept of graphic design and its relationship to tiles?Â

The idea first came to me back in 2008. I had the opportunity to do a project in my hometown of Cascais (at the time I was working as a freelance illustrator, as I am still today), and I wanted to do something that would connect me to my roots of my city/village. It felt natural to include my illustration universe in the patterned ceramic style. This is something that I have grown up with – it’s in every Portuguese mind. We grow up with patterned tiles in houses, inside and outside, and the project for Cascais was to be a canvas applied to a building facade, so at the time it just felt natural and made sense to me to do that. I really enjoyed the result, and the feedback was just amazing, so I felt this was something I needed to explore further. I started working with ceramic and then with stencils.

Where can we see your work here in Lisbon?

I have several ceramic pieces, usually 2×2 tiles, spread around Lisbon, mainly in the central area of Bairro Alto and so on. I also have some murals. I would say the one in LX
Factory is still one of my favorites. You can also see two collaborative murals I did with Eime, from Porto. One is in Lumiar and the other one is in the CHPL [Centro Hospitalar Psiquiátrico de Lisboa] near Avenida do Brasil. 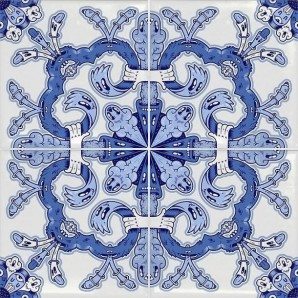 AZ21 from 2012. This was originally used in a unique 2×2. The inspiration for this pattern comes from one of Portugal’s 17th century most common and used patters.

I heard you were a fan of comics as a kid. Was there a specific comic or illustrator that you regard as an influence?

Yes I was and still am a big fan of comic books, but I don’t have a specific illustrator or artist that I look up to for inspiration. I like to go from Disney comic books to DC and Marvel,
passing through some more independent and low-profile fanzines. I try to keep up with what’s happening in the illustration and street art world, by following many and different artists.

I had the luck to grow up with an older cousin who introduced me to a lot of different art, from comic books to graffiti magazines, so I guess that’s why I have a broad range of interests and influences from different areas.

As a street artist (and graphic artist), what advice could you give to kids out late with cans of spray paint?

Haha, good one. I always say that you need to find your own path. So if you like to spray-paint at night, paint trains or just tag the city – well, do it. I did some (very lousy) graffiti when I was young and I think it’s a very important part of who I am today. This was part of the path that led me here, doing what I do. So if “out late with cans of spray paint” is something you want to do, do it. You can paint trains and do bombing until you’re 50, or you can move on to other things that will be influenced by doing that. All paths are good as long as they are your own and make you happy!

Are there any places you would not do your work?

Doing what I do, and having a strong influence from tradition in my work, I like to think that I have a patrimonial conscience, so I don’t like to interfere with monuments and historic buildings (well, if they are degraded, it’s a whole different story. . . ). I also try to keep away from brand appropriation. Now, I need to make this very clear. I like to work with brands, it’s always a very good and exciting experience, and I want to keep on doing it. What I mean by ” brand appropriation” is, I try to stay away from projects that will eat up my work, where I don’t have artistic freedom, or that will wear it down by advertising. 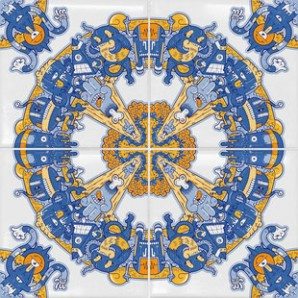 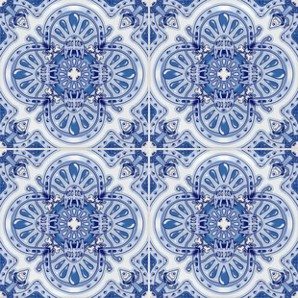 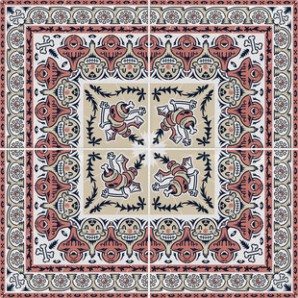 Left: Limited Edition, 20×20 Ceramic, the beginning of Macho’s editions. Center: The Pattern for the Cascais Artspace that started it all. Right: 3 layer stencil mural for Le M.U.R Mulhouse.

Do you think of any kind of graffiti as vandalism, or do you see it all as artistic?

Graffiti is not vandalism.

How is it different being a street artist in Lisbon from other capitals such as London, New York, Paris, Berlin?

I think that it’s harder in some ways but easier in others. It’s harder because in Portugal, a regular Portuguese person doesn’t have that much money to invest in art (and also the habit of making it). Also, galleries here still don’t look to an artist with a street background the same way as they do to a classically, university-trained artist. This is something that happens a lot in the places you mention and that, in my humble opinion, needs to change.

The good part is that there is a lot of freedom to do art. People are looking at art in the streets in a very different way, a very positive way. This is very much due to platforms and entities like Mistaker Maker, GAU, and the Underdogs Gallery, who are all doing superb work in promoting national artists and creating opportunities and events to showcase those artists and to put Lisbon on the street-art map of the world. 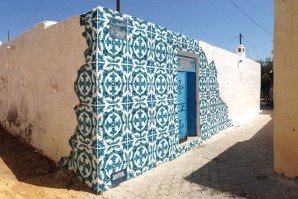 Djerbahood,in Erriadh, Tunisia. This pattern was inspired by one of the the typical Tunisian ceramics.