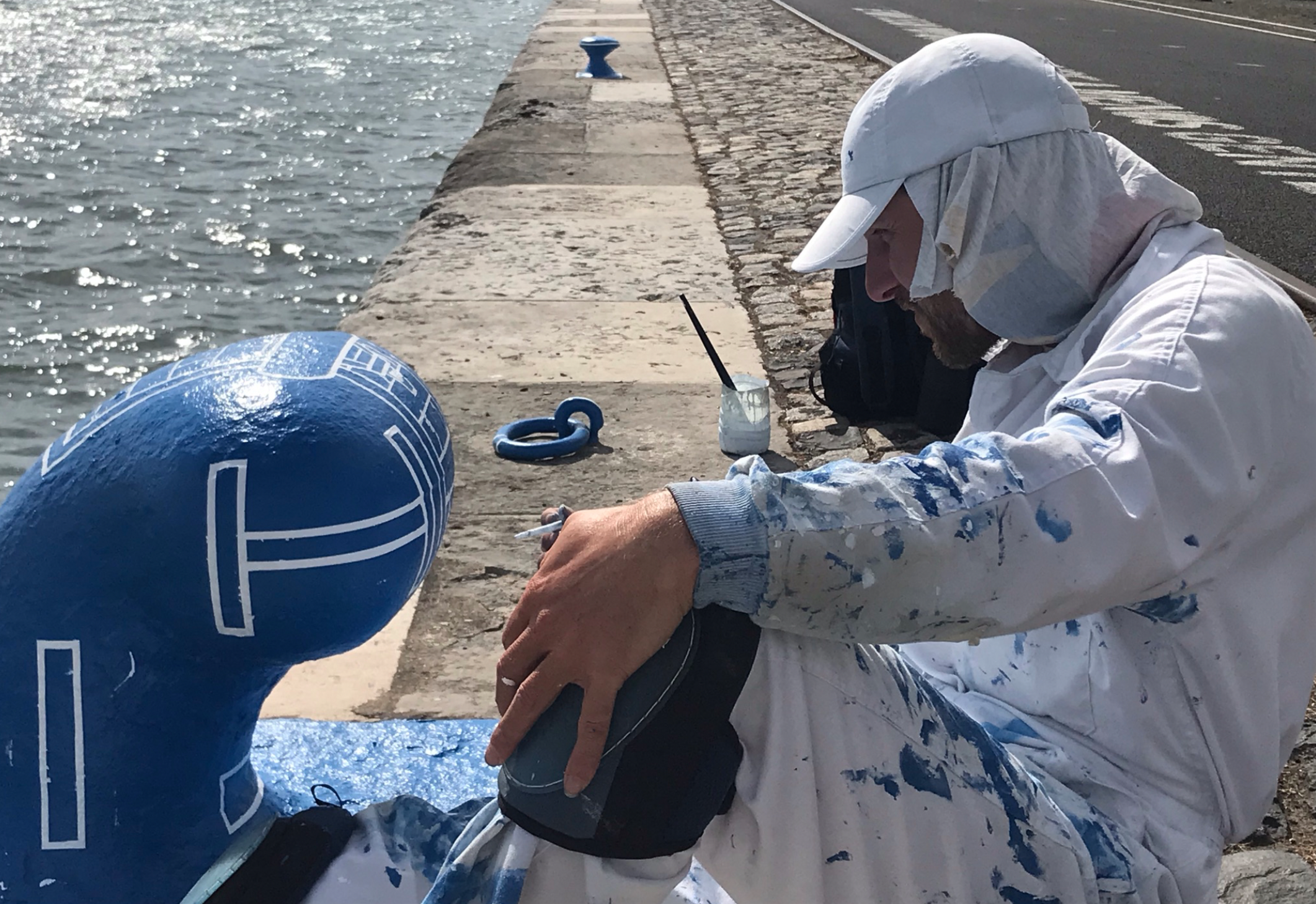 How the ancient bollards along Lisbon's waterfront got a makeover that was inspired by covid, azulejo tiles, blueprints, machinery, and graffiti.

Anyone familiar with the walk along the river from Santos to Cais do Sodré over the past few years has likely spotted the wacky wonderful creatures painted on the iron bollards along the bike path. Some of them got a facelift occasionally or sometimes deteriorated to a point where you no longer needed reminding of their intended use — to tie up boats to the shore, which they haven’t been used for in decades.

Earlier this summer, something started happening. The bollards, one by one, got painted a bright blue, an azulejo blue, you might say, with crisp white lines appearing on top, as if on a … blueprint. Atlas was curious, and luckily there was a handy QR code that quickly connected us to the person behind this.

Justin Amrhein came to Lisbon on a whim that several Atlas correspondents are very familiar with: Brooklyn, as in Brooklyn, New York, and more specifically Williamsburg, was getting too expensive. Artists were moving out. Retail chains were moving in. Paying rent required more and more sacrifices, namely, left less and less time to do art.

Amrhein, who’s originally from Sacramento, California, decided to see if maybe Lisbon could be a good base to continue working as an artist but also have some quality of life. It even looked so familiar to where he grew up. And so he did, landing in Portugal in early 2019 with a plan to stay a few weeks to scope out his prospects.

His plane landed in Lisbon to news back from the U.S. that flights around the world were being grounded because suddenly the coronavirus problem became a global pandemic, and Americans were being urged to avoid all travel.

Amrhein considered his options and, like any intelligent person would, decided that staying in Lisbon — at the time considered a leader in containing the spread of COVID-19 — would be better than going back to Brooklyn.

Eventually, as most newcomers, Amrhein found the waterfront between Cais and Santos and the creatures that lined some of it.

“I looked around at all the graffiti around here and thought that this was an area set aside for it,” he told us, looking over the murals and tags and assorted sketches. “I had never done graffiti before then, but decided to do it here, thinking that it was allowed.”

It wasn’t, but Amrhein didn’t learn that until later. But he did know he wanted to make the bollards into a sculpture.

Amrhein told Atlas that he only did one dock bollard during the shutdown (around March 25, 2020). This original dock bollard from last year (even though severely weathered) is still there and has now been preserved as the source of inspiration for this entire series.

In the past, Amrhein has done a series, Engines, of whimsical blueprints for strange machines in precise engineering detail but with their function left to the imagination of the viewer, as well as another series, Botanicals, that marries detailed drawings of plant life seamlessly merged with elaborate machine parts.

But inspired by Lisbon’s azulejos, Amrhein decided to do an homage of sorts to the craft, and when he saw it, he realized they were, in fact, blueprints.

Initially, the plan was to make them into simple black-and-white three-dimensional drawings, similar to what he’s done before.

“They’re almost like mechanical azulejo tiles, in a certain sense — very lightly,” he told us.

Inspired by the idea, Amrhein headed back for a residency back in the U.S., where he developed what was to become his project in Lisbon. He secured the funding for the project, with the stipulation that he would have permission to do the project.

Luckily for Amrhein, he came across Lisbon’s Galeria de Arte Urbana, the organization that has been supporting and promoting a staggering number of street artists in Lisbon. GUA thought it was a good idea — and was able to obtain all the necessary permissions in a matter of a few weeks, and this summer Amrhein got started.

Technical challenges quickly presented themselves: Amrhein learned from his first experiment with a bollard that regular paint would not stay on too long, and that the iron was often in such poor shape that sanding it risked destroying the bollards. He overcame these issues eventually, through trial and error and advice — but a project that was originally to take a week ended up lasting a month.

According to Amrhein, there was also an intellectual challenge to do “a three-dimensional drawing on a two-dimensional surface that’s a three-dimensional object,” however, this aspect of what he was doing wasn’t something he discovered while working on the project. For Amrhein, it is a very important element of his work that he continues to incorporate, embrace, manipulate and play with. “I could almost say it’s the driving force behind everything and definitely one of the reasons why I call this series ‘3D Blueprints’.”

Working several hours a day on the bollards has also put Amrhein in touch with the locals who use the waterfront on a regular basis. The reaction, he said, was 95% positive. Only very occasionally did he encounter any criticism, or rather, opinion. One man demanded to know who allowed Amrhein to use the particular shade of blue, clearly unhappy with it, for example.

But most of the people that stopped to watch Amrhein paint were supportive, he said. A few told him that he’s making one of their regular walks more beautiful, others thanked him, one couple clapped.

The bright blue-and-white sculptures are in the same spirit of play created by the original creatures painted on the bollards. Saying that the effect is somewhat different is an understatement.

Walking along the shore, it’s easy to spot a variety of elements: plugs, outlets, wires, hoses, display screens, dashboards, fuse boxes, and the like. What they are is harder to determine.

“When I’m working on the individual machines I do have a specific function for each sculpture in mind: some of them are designed to monitor climate change effects and others to attempt and correct such occurrences, for example. They work together as an imaginary network of machines with a collective purpose, however, I prefer to not title them individually as I enjoy leaving them open to interpretation.”