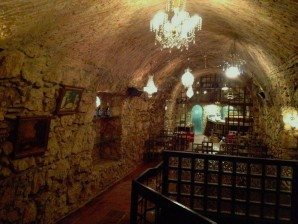 Inside a stone tunnel set into a corner in Alcântara across near Praça da Armada, Adam and his wife Raquel have been slinging beers and NYC-style grub since their opening on June 7. The tunnel, which dates back to 1750, stretches all the way to the Palácio das Necessidades and was used as a horse and carriage entrance under the hillside. It has since been walled off at the back where the kitchen area now stands.

“The space suited us really well,” commented Adam, the chef, brewmaster, and co-owner with Thomas Mancini, “…and [Alcântara] is the next big thing and we’re excited to be a part of that. The praça is really gorgeous and we want to bring more people here to this area.” The downstairs is used for the brew lab and is not open to the public, but Atlas got a sneak peek at the space, how they brew, and why everyone will be talking about American Pale Ale and classic New York deli-style reuben sandwiches by the end of the summer.

Adam came to Lisbon on vacation and met his wife Raquel literally next door to where he was staying. After he moved here, he worked his way up to the position of Head Chef at The Decadente and The Independente when they first opened. A while later he started working with his current partner Thomas at Chimera Restaurante in Principe Real, which together they re-invented to what it is today: a small but successful restaurant that seats 34 people. Once they decided to start brewing and the demand followed the product, it was a no-brainer that they should expand the Chimera kitchen brand to include a Brew Pub, that now bears the similar name Quimera.

We have a little more room to play now and to experiment, and we have definitely played…

“Since we do so many small batches, that works in our favor because that means we have to do a high volume of actual brewing. At this point, I’ve brewed like 50 batches. I’m no master brewer but I definitely have enough history under my belt and we’ve done our research. I’ve delved into it deeply because I just love doing it. We have 12 taps at the bar and we are brewing 8 of the selections. Currently, Quimera Brew Pub has deals with Oitava Colinas, Dois Corvos, Musa, and Post Scriptum to fill out the remaining four taps.”

Eventually, Adam hopes to expand his 12 to 24 so that he can represent most of the other artisanal brewers here in Portugal. But a self-taught brewer, Adam has had some ups and downs.

But as a self-taught brewer, Adam has had some ups and downs. A sugar mis-measurement, for one thing, caused a series of explosions…”We had all these bottles stored in a cupboard and literally one by one they just started blowing up with shards of glass flying everywhere… but that’s really the only thing we have ever had go wrong. Everything else has been really nice, all the beers have been coming out great…Originally we would just order a kit and all of them were pre-weighed with natural malts and hops. Once we got comfortable with the process, we finally started ordering more in bulk so we could do what we wanted. We have a little more room to play now and to experiment, and we have definitely played…The final result isn’t anything so crazy, [it’s] is all fairly straightforward.”

The Chimera beers on tap are varied. There’s a Chocolate Porter, an American, Belgian and India Pale Ale, a Bohemian Pilsner, a Bock, a Dark American Lager, and an American Stout ready to go in bottles and four more in kegs which are the Irish Red, the Euro Lager, the Ex Special Bitter, and the Old Ale. While it all sounds fantastic, it can be difficult to appeal to the Portuguese consumer weaned on Sagres and Super Bock, which, while certainly refreshing, don’t pack much of a punch. So, Adam has chosen to keep his flavors simple.”That’s why we aren’t doing a crazy curry pineapple hefeweizen.” He paused lost in thought. “It sounds horrible but I think I could pull off a pretty good one! I have a chef’s mentality, my own style and my own way of cooking. I don’t care what the f-ck Gordon Ramsay is doing…Sure, you have to adhere to certain guidelines as there is a science to [brewing], but other than that I wanna just play and have fun.”

I also have a very deep appreciation for the classic Blatz beers and Pabst Blue Ribbon, not that I want to drink them per se.

Atlas thinks it’s important to note the taste profile not just of the beers, but the chef/brewer himself. When asked what his first favorite beer from the states was, Adam was torn between flavor and nostalgia. “For me, it goes back to the old school smaller labels that were first on the market, like Sierra Nevada Pale Ale and Anchor Steam. Those were my introductions to the microbrew scene. It takes me back to that time, that era when those were the more popular beers…[but] my family is all from Wisconsin so I also have a very deep appreciation for the classic Blatz beers and Pabst Blue Ribbon, not that I want to drink them per se.

These were the beers that forged the beer mentality in the United States that pre-dates this whole microbrew philosophy. I mean, I love the imagery of that typical Wisconsin bar, so we have brought some decoration elements into our space with all the old beer marks and labels. On some level, we want to pay homage to that history and show respect to the past at least design-wise.”

The Grainfather system pips and percolates in the basement, making each small batch to taste.

As for the process itself, Adam wants it to remain a small batch process. “We still brew only 23-liter batches using this system called Grainfather which is geared toward the home brewer. They’re really cool machines and we use four of them so we can produce 100 liters a day if we wanna crank it. It gives us the availability to really tweak things all the time as we brew on smaller scale levels.”

“We offer events and activities, like come and brew your own beer, so if you have a party coming up and you wanna brew, come on in and brew your own 23-liter batch. You’ll be involved in the brewing process so that would be the opportunity for you to be creative and say hey, let’s do a beer with caramel or dulce de leche, and we could custom label the bottles for your event.” Atlas learned that it takes up to two weeks for the beer to ferment inside the bottle, so keep that in mind if you’ve got an upcoming shindig.

A reuben with a beer? You can’t get better than that.

Besides beer, the pub also offers New York deli style sandwiches including the classic pastrami (cured in house), the bagel with lox, and the reuben melt with sauerkraut, all served with chips, coleslaw, and a pickle. “We really want to make it like it’s made in New York. We don’t have the rye [bread] with the caraway seeds yet because it’s really hard to get, but who knows. I do know that if somebody asks me to put lettuce on their sandwich it’s not happening.”

At this point in the interview, this Atlas reporter muttered the traditional New York phrase, “I’d tell ’em to go f-ck yahself.” Adam says, “A reuben with a beer? You can’t get better than that.” The menu has seven different sandwiches and some simple starters like hummus and bruschetta, and all the sandwiches will be available in halves.

Atlas hopes to see you there if we can take our hands off our beer and our faces out of our sandwiches long enough to say hello. Don’t worry, we’ll leave the New York attitude at home.

Bottles and kegs at your disposal from Quimera.