In the summer of 1866, José Maria Eça de Quieróz, freshly graduated from the University of Coimbra, arrived in Lisbon. He was 21 and restless, unsure whether to maintain the family tradition and dedicate himself to legal practice or pursue the vague dream of becoming a writer. From behind the window, the regular fuzz of the city was barging in — the clatter of carriages and chatter of passersby. Rossio Square was the capital’s center, and Eça lived at the very heart of it, in the family’s apartment at number 26.

In October, he registered himself as a lawyer. Yet, no matter how many times he advertised his activity in the local newspapers, no one ever turned up. For a lack of any better activity, he came back to writing.

As a contributor to Gazeta de Portugal, Eça excelled in writing short stories on nature, mysticism, and art. His other favorite topics were the Age of Discoveries and… boredom. At some point, Teixeira de Vasconcelos, the newspaper’s chief editor, famously concluded: “the boy’s very talented, but it’s a pity that he studied in Coimbra and that in his stories there are always two corpses making love on a bench in the Rossio.”

Undoubtedly, Eça’s university years were decisive for his future career (even if, throughout the first four semesters, he hadn’t made a single friend nor managed to get involved in any sort of social or political activity.) By 1863, he had become a member of a local Boheme and, influenced by new friendships, discovered the pleasures of exotic food and sophisticated clothing, started wearing a monocle, ceased to believe in God, and declared himself a romantic.

After the feverish nights of Coimbra, life in Lisbon seemed dull and hollow — shortly after the arrival, Eça even named the capital “a gravedigger of souls.” This opinion only changed after he met Batalha Reis, another gifted writer who worked for Gazeta de Portugal. Following that meeting, Eça would often sneak down to his friend’s house at Travessa do Guarda-Mor (now Rua do Diário de Notícias) with new articles in hand. Upon arrival, he would announce: “It’s me and my vultures! We’ve come to create by devouring corpses!”

In December 1866, having been trusted with the task of establishing a subversive periodical, Eça left for Évora. Even though the budget of 1,200 mil-reis a year was quite generous (only the President of the Supreme Court, the Crown Prosecutor General, and the rector of Coimbra University earned more at the time), Eça followed Mallarmé’s example and decided to run the periodical all by himself. Yet, in order to give his opinions more credibility, he invented a series of fictional characters, each with an individual style of writing and, often, a truly original personality. One such made-up contributor, named Manuel Eduardo, was a globetrotter who loved the works of Nerval and Heine and who, as the newspaper sadly reported one day, died on the way to Denmark, where he had headed to on foot.

Despite the freedom that the new project offered, Eça gave up after eight months and, frustrated with the dormant society of Évora, returned to Lisbon. This time the capital welcomed him with open arms: out of the peculiar mix of artists with ambitions and aristocrats who had nothing better to do, the Cenáculo group was formed. Its members’ main activities were fierce discussions over philosophy and literature, fencing at four in the morning (with wooden swords) and dining in tascas. It was probably during one such evening that Eça was convinced that he should travel to Egypt. The only text that he published during this journey was on the opening of the Suez Canal. The pleasures of Turkish baths, images of oriental dancers’ undulating bodies, and the gentle drowsiness brought on by hashish, Eça kept to himself. Such notes only became public after his death.

The three-month journey changed him. Real exoticism put an end to the romantic over-refinement. Eça’s style became both more sensual and concise. The experience of living abroad also made him think of a consular career — the post, as he imagined, would have given him an opportunity to travel and write peacefully. There was only one obstacle: in order to become a candidate, he needed at least six months’ experience in public service. Thanks to his father’s connections, Eça managed to be appointed as an administrator of the council in Leiria. The prospect of being trapped in the province again wasn’t particularly appealing, but sacrifices had to be made. Soon Eça informed his friends: “I’m writing from my administrative exile. I’m as bored as the exiled Ovid and the imprisoned Francis I.” The only consolation during these long months in Leiria was his work on The Mystery of the Sintra Road — a wild tale that involved “doctors and captains, masked men and dangerous countesses, glasses of opium and elegant corpses, fearsome tigers and riders in cloaks.” Divided into episodes and disguised as a true report of a crime, it was published in Diário de Notícias throughout the summer of 1870. As Portugal’s first detective story, it immediately became a roaring success.

By June 1871, another project that Eça developed with Ramalho Oritgão became public: As Farpas. Monthly Chronicle of Politics, Letters and Customs. It was on the pages of this magazine that Eça’s sharp humor could fully blossom. At the age of twenty-seven, he had become a feared journalist, and his position as a man of letters was secured.

On  November 9, 1872, Diário de Notícias was informed that “Sr. José Maria Eça de Queiróz was leaving for Havana,” and that, as a little gift for the subscribers, “he had left a short story that should be published by Christmas.” Thank goodness he did, as the time he spent in Cuba was the least productive of his entire lifetime — having taken his consular responsibilities to heart and fallen into numerous love affairs. Throughout this stay, he had managed to finish only one short story, “Eccentricities of a Blond-haired Girl.”

Inspiration returned as he set off to another post: “Newcastle,” he reported, “is an excellent place to study: there is nothing to distract — neither nature, society, theatres nor women. The cold, the constant rain, the extraordinary mud naturally force one to remain at home; what is there to do except smoke, drink tea and read?” In this city of “ill humor and boredom,” Eça had finished his first realistic novel: The Crime of Padre Amaro. It seems that being away from his homeland made it easier to produce works that depicted Portuguese social life with astonishing accuracy.

Once Eça was done with the province, his merciless eye turned towards the city. In The Tragedy of the Street of Flowers, based on an excerpt from the local newspaper, he exposed Lisbon’s society as puritanical and narrow-minded; in Cousin Bazilio, he combated the city’s middle class, criticizing its questionable morals; in The Earl of Abranhos, he taunted the clumsiness of Portuguese politics. And all of it, regardless of the matter, he did in his most refined, sarcastic manner.

In 1885, in order to mend his health, Eça was sent back to Portugal. During this stay, he began a relationship with D. Maria Emília de Castro, whom he married shortly after. Soon, the couple moved to Paris, where Eça was offered a post, and that same year he published The Maias, which many consider his masterpiece. Centered on the history of a single family, the novel offers a bitter image of the entire country — one that, having found itself incapable of renewal, slowly falls apart. Different to Eça’s other works, The Maias also appears to be much more personal. Filled with a sense of disillusionment, it corresponds well with the reflections Eça made on his own life. By the end of the ’80s, like many of his contemporaries, he would consider himself a person defeated by life (“vencido da vida”), since he felt that he had failed to achieve the ideal to which he aspired. 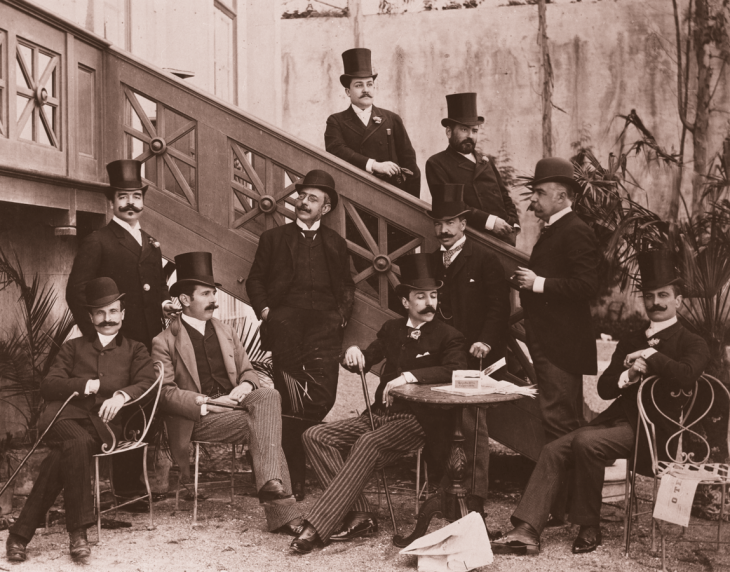 In the spring of 1898, after returning to Lisbon, Eça set to work on his own magazine. The first edition of Revista de Portugal appeared the very same year. Yet the magazine vanished roughly three years later, as the group of “Vencidos da Vida” started to be ridiculed by a new generation of writers. Throughout this time, Eça felt extraordinarily low. He still tried to write, but the new stories were lacking the spark, and by the end of 1898, he found himself exhausted.

His illness, which he had probably caught back in Egypt, killed him on August 16, 1900, at his home near Paris. For the ceremony in Lisbon, his body was transported in a carriage designed by Bordalo Pinheiro and the whole city was draped in black — the arch at Rua Augusta covered with a huge cloth, the lamps at Rossio decorated with silk ribbons. The procession went up Rua da Palma and across Arroios and reached the Alto São João an hour and a half later. The following day, Eça was buried in the tomb of the Resende family.

As the years go by, and his novels remain relevant, it seems that it was Eça’s harshest critic, Camilo Castelo Branco, who judged their value most accurately. On his copy of The Crime of Padre Amaro, a brief annotation can be found: “Admirable. A work of art that, like a bronze, will resist every destructive evolution of schools and fashions.”