Where to Find English-Language Books in Lisbon

Finding books in English in Lisbon isn’t too difficult, and the number of stores selling English-language books keep growing. 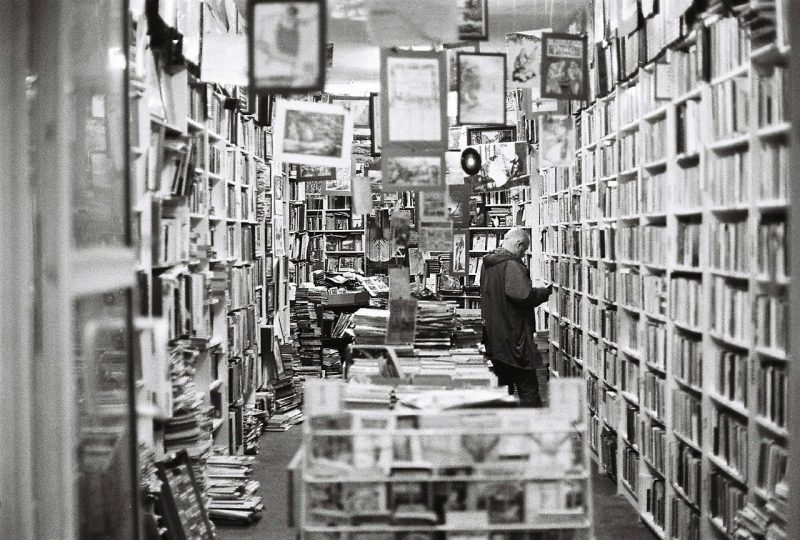 Finding books in English in Lisbon isn’t too difficult, and the number of stores selling English-language books keep growing.

Bivar Books (Rua de Ponta Delgada 34A) is an all-English secondhand bookstore in Estefânia with a penchant for Penguin editions and a bend toward science fiction titles, which are otherwise very hard to find in English in this town. It used to be run by the affable Leena Marjola, but since 2019 is helmed by the woman many around town would like to call “Mom,” Eduarda, who also regularly hosts Creative Xchange events that, in our experience, bring some of the most interesting people in town for a bit of talk.

Ler Devagar (1300, R. Rodrigues de Faria 103) in LX Factory in Alcântara is one of the most gorgeous bookstores around, with a cafe where you can drink wine and smoke cigarettes while you look all smarty-pants. The English selection (all new books) skews toward Portuguese authors and Portugal travel and history books, but there are occasionally titles by contemporary American and British masters and more mainstream books too.

Bertrand Livreiros (Rua Garrett 73) in Chiado is the oldest bookstore in the world still in operation, but it keeps up with the times no problem. Bertrand has a rotating selection of English-language books, including a solid variety of travel guides, but also books by Portuguese authors in English and New York Times bestsellers. It’s got an online store too. Another location in Picoas Plaza (Rua Tomás Ribeiro and Rua Viriato) also offers a small but well-curated selection of English-language books, including Svetlana Alexievich’s Voices from Chernobyl.

Livraria Britânica (Rua Luis Fernandes, 14), in Principe Real, is geared toward English language learners and teachers, its tag line being “Serving the English Language Teaching in Portugal [sic] Since 1981.” As such, it has a peculiar selection: they don’t have books by Hemingway, just about Hemingway, for example, but they did have a Martin Amis novel recently. Nonetheless, you’ll find your Harry Potter here, and it’s perfect for children’s books and classics like Charles Dickens and D.H. Lawrence. You can order online, too — but don’t even think about trying to find their address on their website. Yes.

Estrela Hall (Rua da Estrela 10), home to the English-language theater troupe The Lisbon Players, has a shelf of books, many of them in English, for anyone to grab for a minimum suggested donation of just 1€. But we encourage you to throw in a few more in there if you can — this community-oriented group doesn’t have much funding. While you’re at it, might as well grab a 1€ copo of wine (that’s usually from a bottle, not a box!).

Lisbon markets are also great for finding good deals on English-language book, as well as books in French and German. Feira da Ladra (Campo de Santa Clara, Tuesdays and Saturdays) in Alfama has a ton of used book sellers. Some of them know what they have, others just found it on the street somewhere, so there are bargains galore. Belem Flea Market (Jardim Vasco de Gama, Rua Vieira, first and third Sunday of the month) also occasionally has English-language books.

Finally, if you find yourself in Cascais, there’s an excellent and extensive collection of English-language classics and mainstream pulp, most of them for under 4€, as well as books in French and German and, of course, Portuguese, at Livraria Galileu (Av. Valbom 24-A).

Know of any other stores that carry English-language books in Lisbon? Let us know.

Sponsored Post: 5 Things Expats Need to Know about US Taxes 2021

What is your tax responsibility as an American abroad? Sure, you may have to cover local foreign taxes as you live your life overseas, but you may also have to

New COVID Restrictions in Portugal as of October 14

You can still eat out, meet people, go places, and there aren no curfews — but there are new limits.

The House of Quarantine: An Atlas Contributor’s Invitation to Color Outside the Lines

Are you tired of crosswords, sudoku, chess, and day drinking? Try some relaxing coloring. Yes, it’s for adults!!

Lockdown in Lisbon: Things to Do Indoors to Entertain Young Children

The unthinkable has happened: Coronavirus is spreading throughout the country (see updates here) and all over the world. In the interest of public health, we have to keep our kids

So you’ve probably exhausted your Netflix queue by now and if you can knit, it’s likely you’ve got Christmas and birthdays covered for the next few decades. Your closets have

COVID-19: How to Make Your Own Hand Sanitizer

Coronavirus is here in Portugal, and while Americans and Australians are doubling down on toilet paper purchases, disease prevention websites are going viral. They all say keeping your hands clean and

Another year brings with it another batch of bests, another smattering of stand-outs, and another assortment of achievements. Our collaborators and Atlas’ extended family have banded together once more to

All in all, the market is a must for any wine connoisseur, enthusiast, or wine industry mogul hoping to get the latest info on the best Portuguese wines.