ART EXHIBIT | Corvvs: If He Could Read My Mind | Arroios | FREE 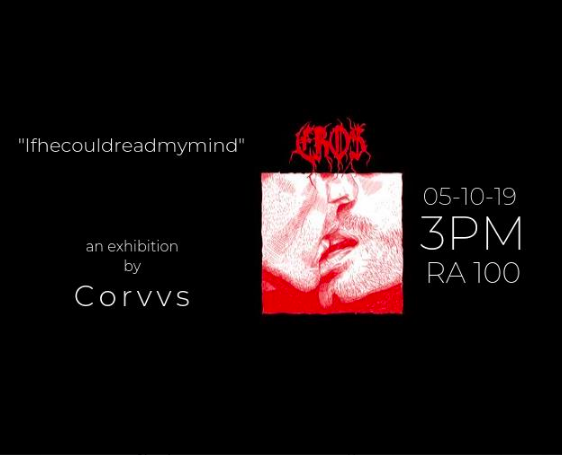 Lisbon-born Pedro Forte, aka Corvvs, is an illustrator, photographer, painter, graphic designer, tattoo artist, and an enthusiast of crows and the color red.

Here’s what RA 100 Arroios, the organizers of his latest solo show, add:
“His style can be described as extremely graphic, erotic and romantic, privileging the exploration of themes such as: portraits, the nude, the queer and urban world, and the dreamlike. In illustration, he uses “cross-hatching” based on the technique of engraving, but by means of bic pen (ballpoint). With regard to design and digital illustration he is very versatile and likes to explore and discover techniques through the experimentation of his artistic practice. Whether on the paper or on the computer, the visual reference is red, as a favorite color, being a warm, strong, striking and raw colour in its essence.

As for his artistic name, it comes from corvus — the scientific name of the species of crows and jackdaws. This is because the crow, besides being considered one of the most intelligent birds in the world, is also one of the most symbolic animals in the world, either negative or positive, often considered messengers; through this latter characteristic, it relates to the style and work of the artist.”