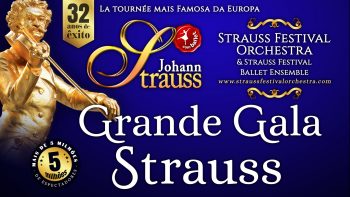 The Strauss Festival Orchestra and the Strauss Festival Ballet Ensemble will interpret titles so well known of the Austrian musician, considered the king of the waltz, such as Napoleon, Feast of Flowers, Klipp Klapp, The Emperor’s Waltz, and more. There will be no shortage of the most famous waltz of all: The Blue Danube, or The Radetzky March that, to the rhythm of the audience’s applause, usually closes the wake…

The concert is one of the high points of the Euroconcert musical season, not only because of the extraordinary festive atmosphere surrounding this spectacular program but also because of the enormous participation of an audience that, year after year, attends the concert enthusiastically to celebrate the arrival of the New Year.

A tradition not to be missed!”