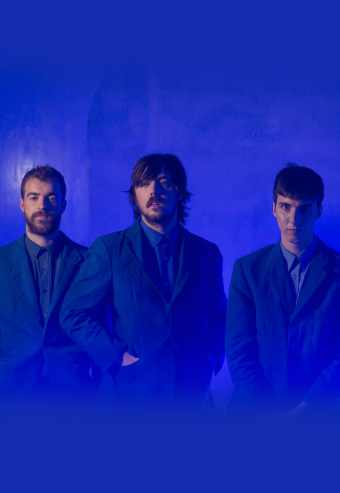 Nuno Rodrigues, Rafael Ferreira, and Rui Fiusa started playing music together in their hometown of Barcelos at the age of 16, having no “vocation for pottery.” In 2011, they released their first album as Glockenwise, and that first album, Calor, has been described by Davide Pinheiro as follows:
“This Glockenwise rally co-piloted by Rui Reininho not only evokes the chopped guitars of Johnny Marr and the Smiths, it revives the psychopathic GNR of the 1980s. Sweat and fantasy.”

Ten years later (today), they are a house-hold name here in Portugal, as far as rock goes, while here’s what Gonçalo Frota (of Público) says about their last album, Plástico:
“They left English at rest and availed themselves of Portuguese to create an amazing record of great pop songs.”

Glockenwise want to share some sweat, fantasy, and Portuguese pop songs with you on July 17, and the 10€ tickets are likely to go fast.