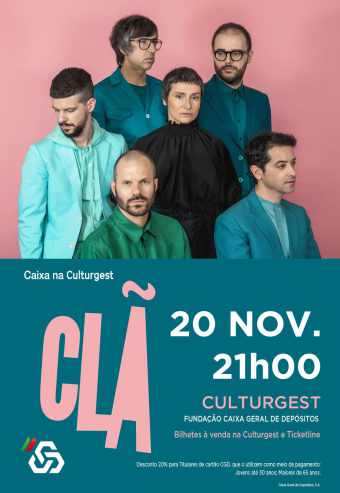 Clã consists of six Porto-bred musicians who dabble in funk, jazz, rock, pop, and experimental music, and definitely have a unique, ever-changing sound. Formed in Coimbra in 1992, Clã have been making a name for themselves both in Portugal and abroad ever since, releasing nine albums (including one in lockdown) and collaborating with countless fellow musicians big and small along the way. Clã was recently voted ‘Best Group of 2021’ in the Play – Portuguese Music Awards and, now that lockdown is over, here’s what the organizers of their next gig in Lisbon say:
“2020 marked the return of the Clã to records. Vespera arrived with Spring, under the sign of the strangeness of these times in which we live. Released in full confinement, the band’s ninth album was very well received by the public, press, and specialized critics…
Vespera was prepared to set fire to the stage – the second home for a band widely recognized for the energy and excellence of their concerts. On the new tour, Clã promise to give body and muscle to the new songs, also bringing with them other themes and classics that make their history and that of all of us.”

Here’s a cool video by Clã to give you an idea.