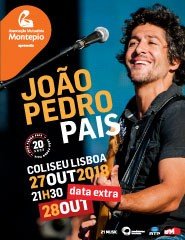 Portuguese singer João Pedro Pais has been consistently releasing albums since the late ’90s. This concert is part of a tour celebrating his 20-year career and promises to be a great live show for those who have been following him since his first album in 1997.

Check him out before you go: