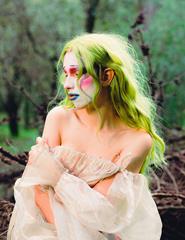 Here’s what the organizers of this Friday night shindig say:
“There is music that emerges from another time and another space. Odete is a name that should invariably be evoked in the attempt to describe these new worlds. With no settled aesthetic category, this hybrid state of her compositions is, in fact, the only possible way to achieve something genuinely visceral and beautiful…

The Consequences of a Blood Language is a unique sensorial narrative released last September… A profound treatise on existence, and its inherent struggle, crossing virtual realities and reinterpreting an enigmatic history of humanity. All matter worthy of attentive labor, in which research and speculation, intellect and imagination, intersect, thus reaching a new dimension. Mere possibilities whose nature Odete’s art reminds us of and incites us. A record magnetic with energy and full of heart in which the term avant-garde hovers without any academic weight, but for the boldness of ideas – and above all because one feels that this music is as ancestral as it is futuristic.

The concept of community has been a constant force along Odete’s path… In this presentation at Galeria Zé dos Bois, Odete’s live set counts with the collaboration of 00:NEKYIA’s collective. In the after, the decks are left to BLEID and Ecstasya – until the lights go out.”