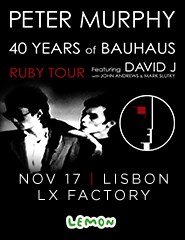 Are there any Bauhaus fans out there?

Well, this one is for you. Peter Murphy and bassist David J reunite for their 40-year anniversary and are coming to Lisbon! Bauhaus is described as “One of the first gothic rock groups… known for their dark image and gloomy sound, although they mixed many genres, including dub, glam rock, psychedelia and funk.”