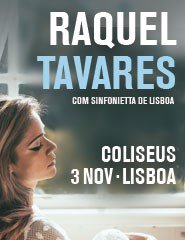 Well, you’re in luck. Raquel Tavares, winner of Grande Noite do Fado, will be joined by the Lisbon Sinfonietta orchestra for a performance at the Coliseu de Lisboa in November.

Her first album was released in 2006, the same year that she won the Amália Rodrigues Revelation Prize, and she is now considered one of the most representative modern fado singers.

Check her out here: