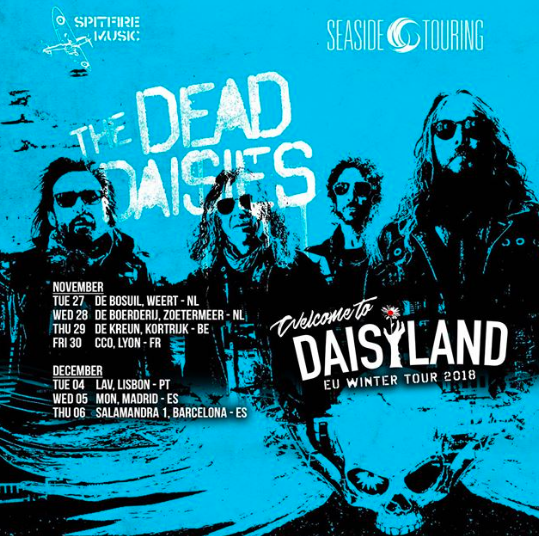 Music is changing. Some changes are good, others are questionable. But if you’re in the mood for some good old-fashioned rock ‘n’ roll, this one may be for you. The Dead Daisies‘ bio has this to say about them:
“Since exploding onto the scene in 2013, The Dead Daisies have taken the rock music world by storm, releasing four studio and one live album to date whilst touring with some of the biggest names in Rock including: ZZ Top, Aerosmith, Lynyrd Skynyrd, Bad Company, Judas Priest, KISS, Whitesnake, Def Leppard and the Hollywood Vampires.
With stellar musicianship and pulverizing live shows, fans worldwide are discovering that rock is indeed alive and well.”
To round up their 2018 tour, they have added 15 venues in the U.K. and Europe, and Lisbon made the cut.
The organizers tell us that “the show kicks off with a more intimate acoustic performance for the first fifty fans coming to LAV before the doors open!
As if that were not enough, the performance is two hours long, so put on your winter boots and try to get there early for an unforgettable night of rock!”

Get your tix here.
Here’s what they have to say about Mexico.