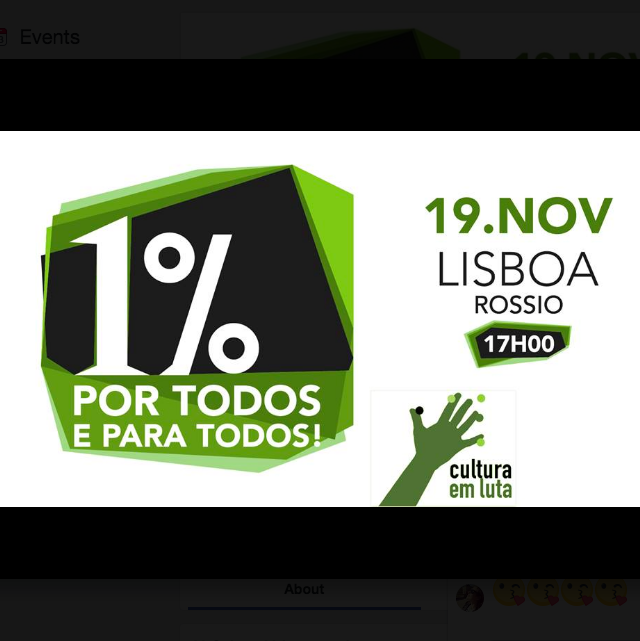 “The price of apathy towards public affairs is to be ruled by evil men.”
Plato.

It’s common knowledge that when you hear “1%,” you are required to think bad things. Unless, of course, you are the 1%, in which case you are wasting your valuable time reading this.
STARQ (Portugals’ Union of Archaeological Workers) has a starkly different view of 1%, however. They are organizing a massive demonstration this coming Monday under the slogan “1% For Everyone and For All.”
If you’re still reading this, there’s a good chance you care about preserving Portuguese culture, or culture in general, more than you do about building hotels for aspiring 1-percenters.
Which means you might want to hear STARQ out.

Here’s what they have to say:
“Now it is time for archaeologists, historians and heritage workers to show their strength and join the demonstration on November 19 in Rossio at 17h.
Culture must be united.
EVERYONE can make a difference.
In the fourth year of the legislature of a government that has used Culture as an electoral banner, the State Budget proposal remains at the same level of the last decade: 0.25% (around 250 million Euros).
The government’s budget proposal resorted to diversionary maneuvers to try to mask an inconceivable political option: to maintain all structures in a state of permanent emergency. Creation, patrimony, research, documentation, dissemination and public access, everything remains compromised, suffocated, cornered, maneuver after maneuver, budget after budget.
With each budget, the government responds with deafness and immobility. With each budget, the government shows that it is not with the Culture. And so we come again to the end of a legislature that has not been able to meet the requirement of a horizon or a compromise.
Last April we occupied the squares of the country to say that we are demanding more, and the government should be too. That suffocating of culture and art is not an inevitability, it is a political choice. In April we shouted “1% already in this budget!”
And on November 19 we return to the streets in the struggle for another policy, continuing to affirm 1% of the budget for stability, worker’s rights, and a true Public Service of Culture for all citizens, and throughout the national territory. We will return to the streets until governments realize that, with endless tricky maneuvers, they can not paralyze a class whose vocation is to act.
CULTURE GOES TO THE STREET!
1% FOR ALL AND FOR ALL!”

This demonstration is open to individual and collective participation. To subscribe contact STARQ or CULTURA EM LUTA directly.
See the full list of participants so far here.

Or just show up and help fight the power, Culture-style.