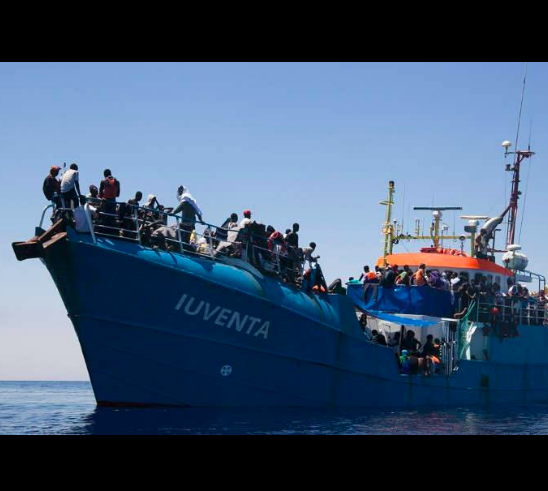 From the organizers:
“Miguel Duarte may face 20 years in prison for saving lives.
During 2016 and 2017, he worked as a volunteer at the German NGO Jugend Rettet on missions to rescue migrants and refugees in the Mediterranean Sea aboard the ship Iuventa. In 2018, he was accused on suspicion of illegal immigration aid by the Italian authorities, along with nine other European youth members of the crew (Iuventa10).

Miguel’s case is not just another legal case, it is a reflection of the current European political situation. In this context, Medeia Filmes in partnership with HuBB (Humans Before Borders), organize a session with the projection of the film Iuventa on the big screen, to ask questions and look for answers.

The film, by Michele Cinque, tries to portray this “Youth that saves” (from the German “Jugend Rettet”), an NGO founded in 2016 in Berlin by a group of young people with a single purpose: to go to the high sea, aboard the ship Iuventa , to save the lives of migrants and refugees. The film follows the work of the NGO, from the first mission in the Mediterranean to the seizure of the ship, after saving about 14,000 lives. Michele Cinque points the finger at the lack of interest in the media and the lack of action of the European institutions in the face of this humanitarian emergency.

Iuventa shows a difficult path, made up of struggles for the defense of human rights, to which it is impossible to remain indifferent. And to talk about this path, we will have a conversation with Miguel Duarte, Michele Cinque, Juan Branco, and Ricardo Esteves Ribeiro (Journalist and co-founder of Fumaça, an independent journalism platform) after viewing the film.

It will be a solidarity session, and the revenues will revert to the campaign Saving lives is not a crime.”

Here’s the trailer for the film.