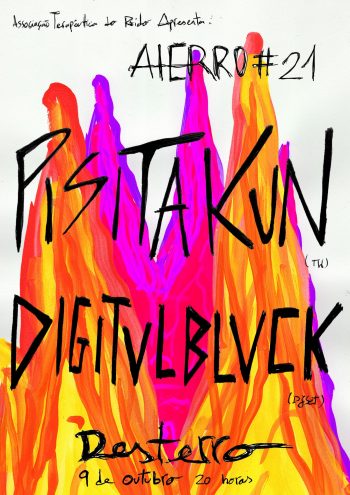 Aterro is a monthly residency at one of Lisbon’s finest late-night musical and artistic havens Desterro. It was started in January 2020, and has survived the end of the world thus far, as evidenced by their plans for this Saturday night, about which they say this:
“In this twenty-first session there will be the return of the Thai noisemaker Pisitakun, who is back to Portugal after memorable passages through our country in 2018, followed by dj set by DIGITVLBLVCK, DJ duo of the Trafka Studio collective.”

And here’s what they say about said artists::
“Pisitakun is an artist from Bangkok who started his path in visual arts in 2009, and shortly after also in music, using synthesized sounds and various musical instruments to create a sound inspired not only by the historical and political events of his country, but also by his own personal concerns and frustrations. He is returning to Lisbon to present his latest album, Absolute C.O.U.P., which was released last year on the Chinabot label on cassette and a bullet-shaped USB device, in which he explores the long history of military coups and subsequent undemocratic regimes that his country has experienced in the last 100 years.

DIGITVLBLVCK is a DJ duo formed by Márcio Oliveira and Halison Peres, co-founders of Trafka Studio in Xabregas. Their palpable enthusiasm for music is a pleasure to witness, and although they both come from the psychedelic rock scene, their DJ sets are dedicated to post-punk, EBM, industrial, and techno, with strong connections to German music but never forgetting those who also like to dance to the beats of the 70s and 80s.”