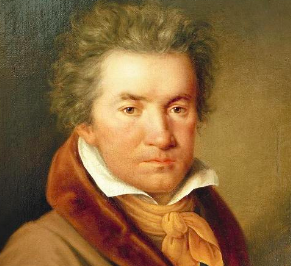 Beethoven.
You’ve heard of him, right? He’s the dude on the left. And he was kind of a weirdo (and, sometimes, kind of a dick), musically and humanly speaking.
For example, did you know that:
-Ludwig often dipped his head in cold water before composing his tunes;
-He loved to cook (and named one of his pieces Christ! On the Mount of Olives);
-He was said to be jealous that Rimsky-Korsakov wrote an opera called “Mozart and Salieri” instead of “Mozart and Beethoven”;
-He often stormed off stage if he heard chatter in the audience;
-He bribed officials to obtain custody of and take his nephew away from his dead brother’s wife;
-He was really good at freestyling (or, improvising, as they called it back then);
-He was not a picture of health, throughout his life suffering from colitis, rheumatism, rheumatic fever, typhus, various skin disorders, abscesses, various infections, ophthalmia, inflammatory degeneration of the arteries, jaundice, chronic hepatitis, cirrhosis of the liver, and, of course, deafness;
-He gave piano lessons almost exclusively to exceptionally talented students and/or hot chicks;
-Despite his talent, he paid his bills mostly with said piano lessons;
-Thousands of people showed up to his funeral?

This Sunday, Ludwig’s legacy comes to Museu do Oriente, and, with the weather feeling like a full-body dip in cold water, you’re invited to warm your bones with the enigmatic weirdo genius’s tunes, for free.