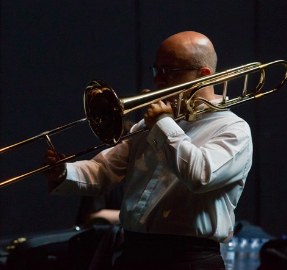 This Saturday, the Museu Nacional de Arte Antiga invites you to hear some near-century old and modern classical jazz music, amidst some of the country’s oldest art, free of charge.

From the organizers:
“French composers have always shown great affinity for American jazz over the last century… In particular, the trombone was one of the instruments most permeable to this influence. The program of this recital is shaped by two compositions dating from the 1950s that mirror this. The dragged notes (glissandi) and the melodic lyricism that stand out Jean-Michel Defaye’s Two Dances bring us right away to the dense air of a Harlem nightclub, while the scond dance incorpates Latin rhythms into the jazz souns (EDITORS: here’s the only free version we found, the others you have to pay for).

Another example is Henri Tomasi’s Trombone Concert, albeit in a less explicit way. Its three moves are based on the theme I’m Getting Sentimental Over You, which dates back to a 1932 recording with jazz trombonist Tommy Dorsey. Always with the formation of trombone and piano, the program is completed with a transcript of the famous Pulcinella Suite by Igor Stravinsky, the Russian musician who knew how to disturb the serenity of French Impressionism, and an Anne Victorino d’Almeida Sonata, a piece inspired by an idea of ​​passion and premiered in 2017 at the Gravissimo Festival! at Alcobaça.”