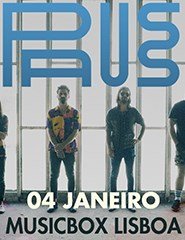 This year is the 10th anniversary of the Lisbon-born band, Paus.

To get an idea of where they’re coming from, in a recent interview with Blitz they said they “grew to look in from the outside and to think that inside here, in Lisbon, was [where] everything happened, when in fact the real expression and the actual mixture were happening on the periphery.”

Now, not many people are going around saying Lisbon isn’t hip-as-feck at the moment, so they’ve probably got something to say. And they say it in a weird electro, pop, rock, slightly-jarring manner.