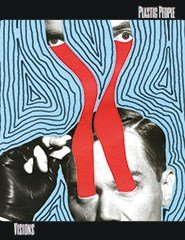 Three musicians from Alcobaça — John Goncalo (voice), André Frutuoso (guitar), and JT (synthesizers, keyboards, vocals) — come together to form Plastic People. At this show, they will be playing the 10 songs that make up their debut album Visions, which is “a true punk novel.”

According to the organizers, Plastic People’s “music oscillates between love and hate, between light and darkness, between lust and decay.”

Well, if that doesn’t get you interested, nothing will.