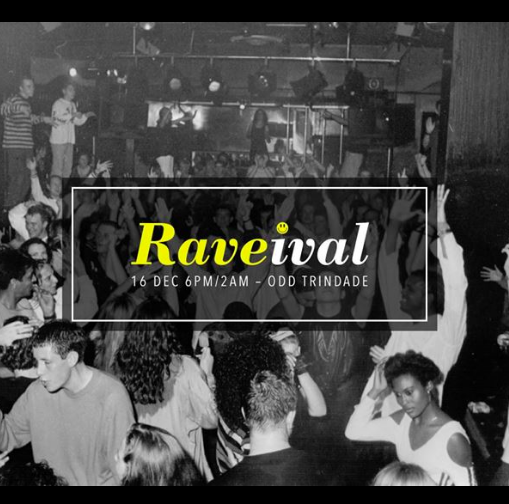 Urban Dictionary defines a rave as “any gathering of people centered around listening to and dancing to electronic music, as played by a set of live DJs. Originated in 1989 in the UK as underground, often illegal gatherings in abandoned warehouses. Often characterized by the positive, psychedelic atmosphere, influenced often (but not always) by drugs and casual sex.”

ODD Trinidade, the organizers of RAVEVIVAL, define there Sunday night party as follows:
“On Sunday the 16th of December we’re going to get together again for a late-afternoon raving session, bringing back the sound and the style of original raves from the late 80s/early 90s. Back then you would go there and meet the same people you raved with before, like a big family.
To really fit the theme, you’re highly encouraged to dress up as crazy as you can, put on your comfortable baggy colorful clothes and get ready to have a blast! If you need some inspiration, check out this collection of pictures from early 90s raves.
In case you weren’t there, here’s what the previous parties looked like.”

Check out the full line-up of DJs here and come move your body and hands in a way that can only be explained by the everlasting pursuit of drugs and/or casual sex.