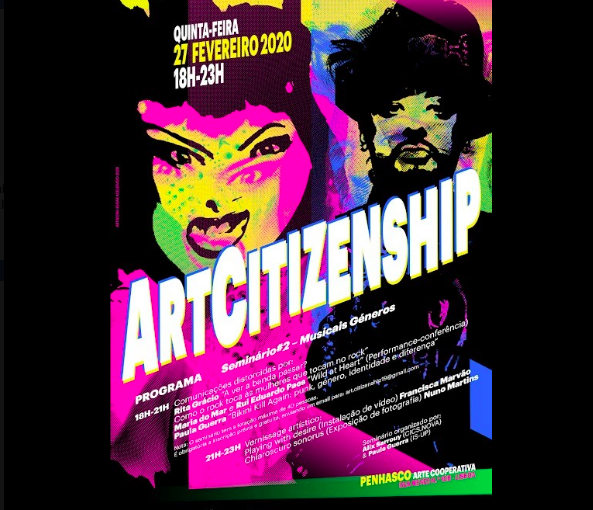 Gender, race, nationality, age, religion, rent…
These things have been known to cause division, hate, war, and death.
Music, on the other hand, has alsways been known to unite.

Here’s what local non-profit ArtCitizenship says about this upcoming music thing:
“In the worlds of music, the disparities in the representation of multiple human genres are reflected. Each musical genre has its own history regarding the relationship with gender identities. How and where do genres echo in (sub) musical genres? How can musical genres serve as a tool for understanding social complexities and paradoxes?
To go beyond what is visible to the ear, we call for the sharing of knowledge in a seminar format. We propose to start from three types of sounds – Rock, Improvised Music, and Punk. They are not despotic genres, they serve as a basis for other listening. As for identities, we also have a natural opening to your rainbow, but we will start from three consequent cases – women in Portuguese Rock, testosterone flows in Improvised Music, and the Punk bases of riot grrrl.

Four guests will release the first distorted chords of this seminar when presenting their work (18h – 21h):
-“Watching the band go by? How rock touches women who play rock ”- RITA GRÁCIO: PhD in Sociology from the University of Exeter, in partnership with CES-UC, and poet.
-“Wild at Heart” (Performance-conference) – MARIA DO MAR: Violinist with conscience, improviser who also likes music, programmer of interventional music that is urgent to listen to; and RUI EDUARDO PAES: Essayist, music critic and curator with a mission spirit and little sense of career, always willing to lose battles.
-“Bikini Kill Again: punk, gender, identity and difference” – PAULA GUERRA: Sociologist, teacher and researcher. It has been in music and, above all, in the unstable lightness of rock, that has developed its texts and contexts.

Seminar # 2: Musicais Géneros also involves the presentation of the work of two artists who have closely followed these themes, and who have captured them through their respective lenses (21h-23h):
‘Playing with desire,’ a Video installation by FRANCISCA MARVÃO and ‘Chiaroscuro sonorus,’ a photography exhibition by NUNO MARTINS.”

NOTE: The seminar has a maximum capacity of 40 people.
Prior and free registration is mandatory by sending an email to: art.citizenship19@gmail.com.