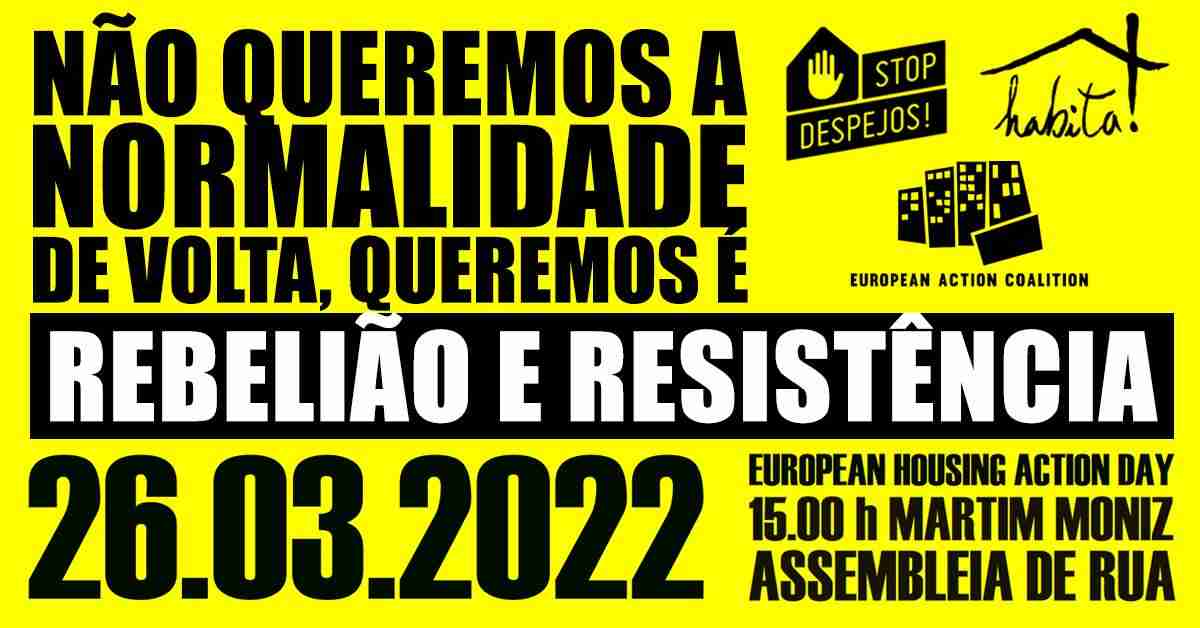 “Housing for people not for profit!” is the slogan of this year’s European Housing Action Day, happening this weekend. And so, here’s what Stop Despejos, the organizers of this Saturday afternoon show of solidarity here in Lisbon, say:
“We would like you to participate in this occupation of public space and share your ideas and proposals at the open mic, to set in motion a collective Plan of Rebellion and Resistance. We want a CITY and PLACES for the people and not for PROFIT! The capitalist normality in which we have become used to living feeds on crises, emergencies, and the exploitation of the weakest.
We have become hostages of a daily routine ruled by uncontrollable waves of pandemics, and in the fear of contagion, we have lost affection and revolt.
We have simultaneously become passive spectators of successive wars against the poor, the plundering of cities, and the devastation of territories, with no prospect of a resolution to the conflicts or to the economic crises.

The issue of the “housing crisis” is central to this system of exploitation: evictions, foreclosures, rent increases, and foreclosed homes in favor of *SPECULATION*, result from decades of government policies aimed at keeping the working people, the people who have the least, and the most disadvantaged subjugated, continuing to perpetuate a system based on social inequalities. But the *fight for housing* is also central to the liberation of those who are exploited and subjugated by capital. It sounds obvious, but it’s worth saying out loud: a decent home is vital for good health, housing stability is fundamental for better education, a home is indispensable for the (re)production of life…”

The protest commences on Saturday, March 26, at 15h, at Martim Moniz.