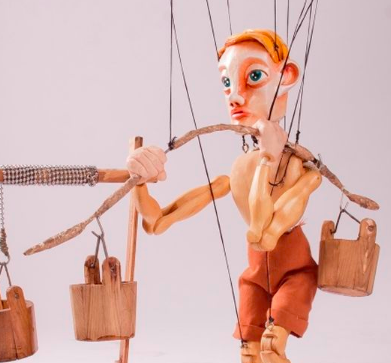 Do you suffer from pupaphobia?
If so — DON’T LOOK LEFT! — this one’s not for you.

If not, then you might be interested to know that there’s not just one but two free puppet shows in Lisbon this weekend.

From the organizers of Bzzzoira Moira:
“Legends of enchanted Moors and fantastic beings populate the country, and this one, by the Mandrágora Theater and Puppet Company, is inspired by a traditional tale of northern Portugal.

Once upon a time there was a black well that, they say, hides a treasure guarded by a Moor enchanted by a spell. At night, the young woman cries while she combs her hair, but during the day she is transformed into an animal that chases the water-bearer on his way to the well, where he fetches water. This is the beginning of an extraordinary story. At night when walking the streets, it is easy to remember that each nook hides a legend, which hides a mystery, which reveals a little of us, our identity and culture.”