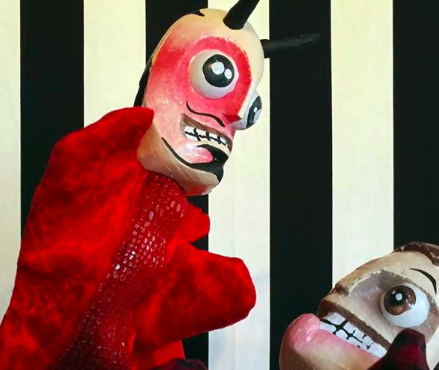 Puppets.
Some people fear them.
But it may just be because some of those people are actually just puppets themselves…
Anyway, puppets are cool and shouldn’t be feared.

About the film Dom Roberto, from IMBD:
“João Barbela is poor man who lives out of charity – what coins the people of Lisbon’s popular districts give him as ‘pay’ for his puppeteering work. For the kids, he is like a king, Dom Roberto = puppet). When he meets Maria, an equally poor girl, he fancies to change her life, and get her a house, maybe marriage, and being happy together. Life does not exactly have a happy ending, like he managed with his puppets’ 5-minute plays…”

From the organizers:
“In a great interaction with the public, playing with the comedy and with the most primary feelings, Dom Roberto will seek a traditional memory and challenge the audience to fulfill their most primal desires: it makes the audience shout, jump from the chairs, create empathy, and at times the spectator is also Dom Roberto, who defies the laws and conventions and becomes invincible … in these stories of traditional memory brought to the Gulbenkian Garden by the Mandrake Theater and Puppets.”