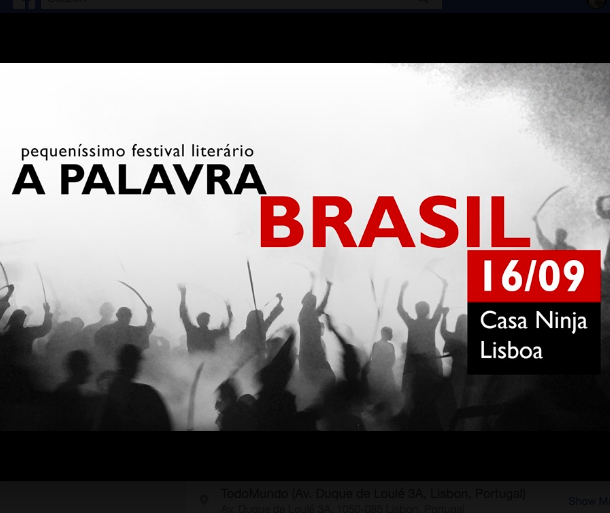 From the interwebs:
“Brazil derives its name from brazilwood tree. In Portuguese brazilwood is called pau-brasil. Brazil was first called Ilha de Vera Cruz (“Island of the True Cross”) but was quickly renamed Terra de Santa Cruz (“Land of the Holy Cross”) upon realizing that Brazil was clearly not an island. From 1502 to 1512 Lisbon merchant Fernão de Loronha harvested some 20,000 quintals of brazilwood on the Brazilian coast. During Loronha’s tenure that the name began to transition to Terra do Brasil (“Land of Brazil”) and its inhabitants to Brasileiros.”

Unfortunately, when most people hear the word “Brazil” nowadays they just think Bolsanaro. Or the burning Amazon. Or wax jobs.
And, outside of the aforementioned ass clown, massive ecological disaster, and semi-offensive stereotypes, Brazil has seen its share of bumpy roads. Which, if anything, can be great writing material…
“A Palavra Brasil” is described by its organizers as “a very small literary festival;” it aims to celebrate Brazil and its words, with 12 hours of talks and workshops about its literary scene.
And it’s happening this coming Monday.

Here’s the full program, courtesy of the organizers:

MORNING WORKSHOP:
10h30 – 12h30:
The word that moves – Workshop of dance and body/verbal expression with Isabella Maia.
Find bridges between the body and the word so that the practice of body expression expands and seeks new forms of movement. Think the body beyond the feelings that go through it and review in the memory of the body where the word can be a motivator of this expression. The body has its own vocabulary, making its expression become language. The meeting of these two worlds can result in poetic expressions, thus bringing a new way of moving. What is the word for the body in motion? Are there more than one? Can it stop being just a word when the body invites it to dance?
Cost: 5€.

AFTERNOON WORKSHOP, with Aline Camargo.
Time: TBD (check here).
The Theater of the Oppressed is the theatrical method elaborated by the Brazilian playwright Augusto Boal, who thought of a theater that put social problems in discussion through the dramaturgy using a closer approach with the audience as an instrument of his action. Its purpose was to promote a real democratization of theatrical performance for people in less privileged situations through various techniques such as theatrical games and exercises that favored the construction of a less oppressive world. For this workshop, the theater of the oppressed will be applied through the technique of the newspaper theater.
COST: 10€.

P.S.: You’ll probably need some Portuguese for this one.