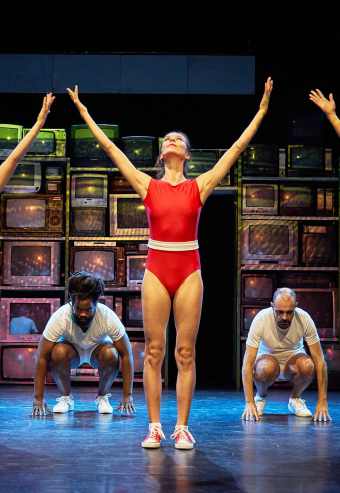 Here’s what local theater company Hotel Europa says about their latest production, Amores de Leste (or “Loves from the East”):
“Amores de Leste travels between Africa, Portugal, and Eastern Europe through the stories of people who lived on the other side of the Iron Curtain, while fighting for the end of Portuguese dictatorship and colonialism. What impact did this time spent in the communist regimes of Eastern Europe have on their lives? Some left the party after this experience, others remained in the militancy. Some fell in love and started a family on the other side of the Curtain; other families collapsed with the collapse of the Eastern Bloc in 1989.

Based on collected accounts and on the stories of the performers themselves – from Angola, Cape Verde, the Czech Republic, Germany, Mozambique, and Portugal – this show questions the relationships between love, family, and politics.”

Note: Show is mainly spoken in Portuguese, with some parts in German, Czech, Changana (Mozambique), and Russian, with subtitles in Portuguese.

Children under 12 are not admitted

*To purchase Conditioned Mobility tickets, and in case there is no availability at the usual sales outlets, please contact the Culturgest ticket office by calling +351 217905155. Use of mandatory mask inside Culturgest and during shows. The presentation of the Covid Digital Certificate is mandatory for access to the event, self-tests will not be accepted.