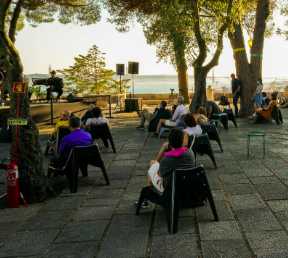 Here’s what the organizers say about each Friday night’s talent:
“August 7 – Elmano Coelho and friends.
Saxophonist Elmano Coelho combines the tradition of jazz with its essence and reformulates it again. His music is challenging, innovative, melodic, groovy and soulful, and creates a strong connection between jazz from the 50s and 60s to Contemporary.
The tenor saxophonist is accompanied by two reference musicians with whom he has played for years – Paulo Sérgio Matos on keyboards and Carlos Miguel on drums.

August 14 and 28 – Jéssica Pina Trio.
Jéssica Pina is a Portuguese trumpeter of African descent (Angola and Cape Verde) and with jazz influences, improvised music, and world music. Jéssica was part of the group of musicians who accompanied the American singer Madonna, in her new production MADAME X world tour. With an innate talent and a very unique identity and sonority, she brings soul/funk sounds with warm African influences.
She performs in an instrumental trio of soul music, funk, R&B, and Pop, with originals and covers. Jéssica Pina (Trumpet), Anderson Ivo (Keyboard) and Eron Gabriel (Drums).

August 21 – Michele Ribeiro Trio.
Michele Ribeiro, Brazilian pianist and composer, launched, in September her first authorial project, ‘Luz de Outono’.
Born in Brazil but living in Portugal since 2006, Michele collaborated in several projects related to Jazz and other musical genres, having accompanied well-known Portuguese interpreters such as the singer and composer Paulo de Carvalho. She’s joined by Romulo Duarte on the Bass and Rogério Pitomba on the Drums.”

FREE ENTRY* upon reservation via info@castelodesaojorge.pt or +351 218 800 620 (with ticket pickup on the same day, starting at 18h30, subject to space availability).

*The concerts are outdoors — because, you know, the sunset and stuff — but be safe anyway.