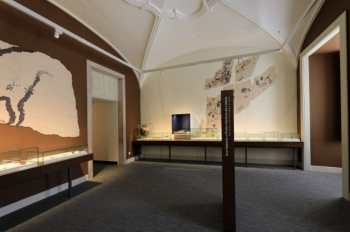 The Palácio Pimenta branch of the Museu de Lisboa, much like Lisbon itself and the rest of the world, has undergone some changes recently. But most of these are actually positive (no pun intended)! For example, on June 9, 2021, after months (years?) of renovation, it opened to the public on its ground floor a “new long-term exhibition,” and here are some of its highlights:

– More than 500 pieces (over 200 of which are new compared to the previous exhibition), that are “an invitation to a Journey into the city, which reveals the evolution of Lisbon since the Paleolithic, over a hundred thousand years ago when the first inhabitants arrived in this territory until the splendor that the city reached in the reign of D. João V (r. 1706 – 1750). The route, organized chronologically, reveals different stages of urban development and the occupation of the territory, complemented by aspects of daily life, important architectural, artistic, and archaeological landmarks.

– The return of the Model of Lisbon before the 1755 Earthquake, complete with ten thousand miniature buildings that extend over ten meters in length and four meters in width (one of the most emblematic pieces in the museum’s collection).

– Several levels of information — videos, associated texts, drawings – “in the windows, on the walls, and inside the drawers,” both for kids and adults.

– A special area dedicated to the importance of ceramics in the construction and identity of Lisbon, as present in ancient artifacts found in archaeological excavations, and in ceramic coverings in public and private buildings.

And the exhibition keeps growing as renovation works are being completed.

*FREE for kids 12 and under (and more discounts here).