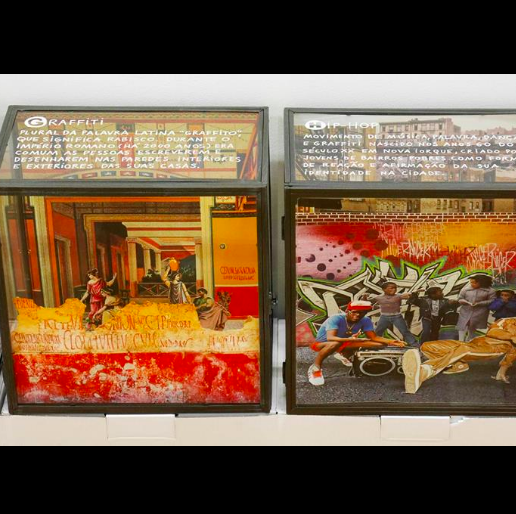 Once, a very long time ago, graffiti was considered counter-culture. It was dangerous. You and your loved ones might even get murdered if you did it wrong.

Nowadays, however — with graffiti being more mainstream than ripped jeans, veganism, and eco-friendliness combined, and that GECO guy (or girl, or other) increasingly dominating every possible square inch of Lisbon — it’s become harder than ever to distinguish between actual art, marketing, or plain territorial pissings.

Nevertheless, Lisbon no doubt has a lot to offer in terms of the art of making walls pretty (in the name of capitalism or otherwise). And, much like this city, graffiti has been around since the beginning of recorded history.

Here’s what the organizers of Instalação Eu estive aqui – História do Graffiti de A a Z tell us:
“The act of scratching informally on the walls always accompanied humanity. Organized as a glossary of words related to this universe, this installation exposes the relationships between contemporary graffiti and what humans have been scribbling at different times, in different geographies. From prehistoric engravings to graffiti signatures, from bathroom writings to revolutionary murals, from Viking runes in medieval cathedrals to indecipherable alphabets on the walls of our cities, from hip-hop to comments on the walls of Roman houses, we discover a world ritual of communication, rebellion and beauty.”

Go feel like you were there, even if you didn’t have the knife or marker to prove it.