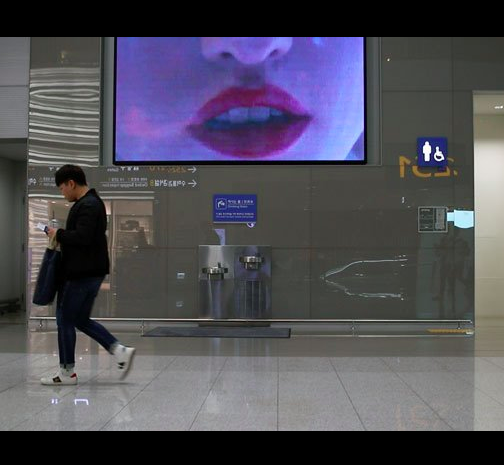 “In the land of the blind, the one-eyed man is king.”
Desiderius Erasmus.

António Guimarães Ferreira is a Portuguese artist living and working in Lisbon. Here’s what the organizers of his new show, Visão Monocular (“Monocular Vision”), tell us:

“The human body is equipped with binocular vision. Two eyes capture an equal image, which merges into the visual cortex. If there is dissonance and the images are different, it will produce discomfort. This system implies living with one image at a time.
There are cases of monocular vision in nature. Chameleons, and some fish and birds can independently move, rotate and focus each eye, allowing them to ‘see’ (capture, interpret, and act on) two objects simultaneously. Your brain has the ability to deal with both images, which are not fully dissociated: one eye always has some knowledge of what the other is seeing, and information is crossed and gathered.
Video surveillance cameras, endoscopes, and mobile phones are also human eyes, though monoculars. They accumulate recorded and editable images, and their operation and utility remains dependent on brain interpretation. The vision these eyes produce allows a succession of binocular and monocular visions that can operate as extensions of individuals, a group, or society in general.

‘Monocular vision’ is constituted as a body with several independent eyes and able to merge/ponder different images. Possessing a complex cortex, it proposes a way of looking at the world that takes advantage of the multiple points of perception available to build from the disparity.