to Mar 7 | ART EXHIBIT | Tamara Alves: When the Rest of the World Has Gone to Sleep | Braço de Prata | FREE

An event every week that begins at 19:00 on Tuesday, Wednesday, Thursday, Friday and Saturday, repeating until March 7, 2020 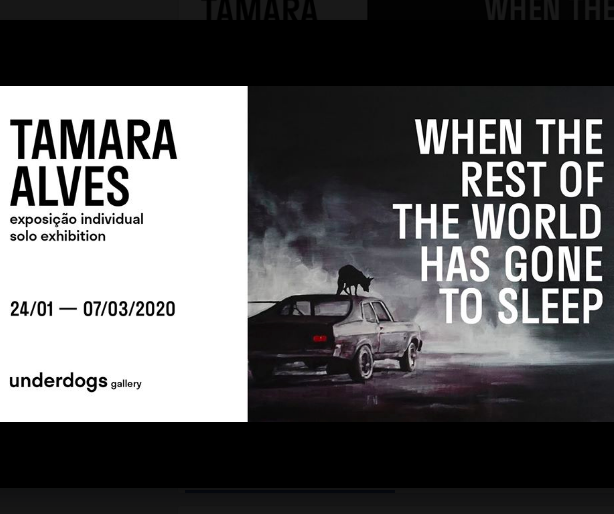 Tamara Alves was born in 1983. She holds a degree in Fine Arts and a Master’s in Contemporary Artistic Practices. She lives and works in Lisbon. Her murals can be found here and there around Lisbon but are not in your face; they’re easy to recognize because they’re good. Tamara prefers her canvas and show-space to be the street rather than art galleries.
That is, until now.

“When the Rest of the World Has Gone to Sleep” is Tamara’s first solo indoors exhibit, and the Underdogs 10 art gallery has the honor of housing it through March.
Here’s what they say about:
“‘… starving hysterical naked …’
Repeating over and over this line from the poem Howl by Allen Ginsberg in her mind while she works, like some sort of mantra, Tamara Alves has been weaving a narrative that celebrates in a raw, poetic way the primeval vitality of strong sensations, of an animal becoming, of brute passion, as opposed to rational deliberation.

Based on the idea that our instincts are what defines us, the artist presents in her first solo show at Underdogs a set of works painted on various media and in various formats – acrylic on canvas, watercolors, sketches with colored pencils – which, invoking a universe of (female) human and animal figures in interaction with the natural landscape and objects imbued with a strong symbolic charge (the car, in a clear allusion to the visceral passion explored by David Cronenberg in Crash), invite us to embrace feelings as a wild and untamed driving force. A universe where love, always love (which is wounds, pain, tears, but nevertheless pleasure, joy, ecstasy), can be the fruit of an impact, an accident, growing within us like a wildflower. A universe where the night is synonymous with release and fierceness when lovers meet and wolves set out.”

That’s right, kids.
And out come the wolves…
Go show some love.

Exhibition on view until March 7th.