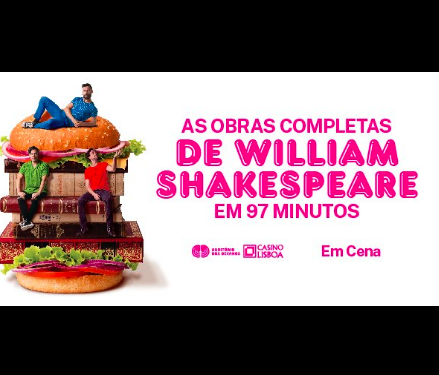 Oh, Billy. He was good… Timeless…
That said, when was the last time you finished one of Billy’s books?
That’s right, ain’t nobody got time for that nowadays.
However, if you still want to stay woke to the ways of the Bard without dedicating a lifetime to it, fear not.

There are shows that are a real phenomenon. This is one of them!
From tragedies to comedies, to historical plays and even sonnets, William Shakespeare’s Complete Works in 97 Minutes revisits Shakespeare’s 37 works and engages audiences in such a way that they become an integral part of the action.

Produced by UAU… the play The Complete Works of William Shakespeare in 97 Minutes marks several generations, as it has done since its debut in 1996, now staged by António Pires and acted by Pedro Pernas, Reuben Madureira, and Telmo Ramalho.

NOTE: You’ll need 97 minutes and to speak Portuguese for this one.