to Oct 10 | ART EXHIBIT | Waldemar d’Orey: Something is Missing | FREE 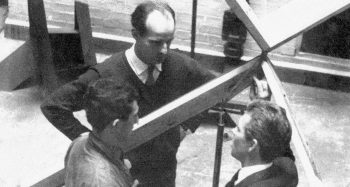 Architect, painter, sculptor, professor and Lisbon native Waldemar d´Orey’s has had two solo shows in his centuries-spanning artistic career: the first one was at the prestigious AXIOM Gallery in London in 1966, and the second one is happening now, some 55 years later, in his hometown of Lisbon, at Lumiar Cité to be precise. And their description of it is as enigmatic as Waldemar himself:
“A resurrection of a work of art, which was mysteriously lost during the artist’s 1960s ‘swingeing days’ in London, constitutes the core of d’Orey’s show Something is missing. The kinetic cantilevering sculpture Mobile appeared on the cover of the prestigious Whitechapel Gallery catalog New Generation 1965, photographed by the no less prestigious photographer Lord Snowdon. At the time, Mobile was notably absent in the exhibition itself, the cover image of the catalog together with some other washed-out shots, as well as the artist’s meticulous memory, were all that was left.

Opposite the gallery in Alta de Lisboa, a wall text from Lumiar Cité’s first exhibition in 2005 states: ‘When something is missing it can be added.’ Sixteen years later, this public artwork by Teolinda Varela echoes and seems to fulfil itself in d’Orey’s project. Dedicating the residency at Maumaus and the exhibition budget to the reconstruction of Mobile, the artwork is no longer missing. It will forever remain missing in the 1965 Whitechapel Gallery exhibition though – we wonder how many visitors, having the catalog in hand, were searching for the rather photogenic work on the cover. The object’s missing has been undone at Lumiar Cité, so the ‘original’ forever lost is now evoked by its substitute, by a new ‘original’, which is only possible because of the first original having been lost, which in turn constitutes the conceptual punchline of d’Orey’s 2021 exhibition.”

*Maximum four visitors in the gallery at any time.
Face masks are compulsory.