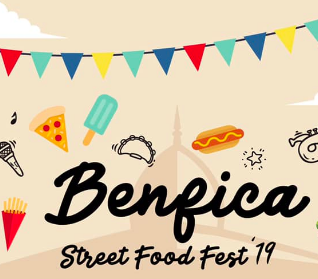 Oh, Benfica.
You’ve probably heard of it by now.
It’s more than just a nation-splitting football team. It also remains one of Lisbon’s less-gentrified and, therefore, more Portuguese neighborhoods. Because even the hippest of hipsters don’t go there past sundown. And if you meet someone who was raised there — you can be sure that they are from the streets yo…

Speaking of Benfica, the streets, and gentrification — did you know that this weekend is the first official Benfica Street Food Fest?

Here’s the word on the street (from the organizers):
“The first edition of the Benfica Street Food Fest takes place on the weekend of October 11-13*, and it comes in the form of a dining experience with a cultural program, plus live outdoor music.

The Benfica Street Food Fest is the first festival devoted entirely to the street food experience that brings together famous American steakburgers, pizza, hot dogs, vegetarian burgers, among many other options.”

Along with hotdogs and American veggie-and/or-steak burgers, there will also be live local bands, DJs, and of course a yoga workshop or two.