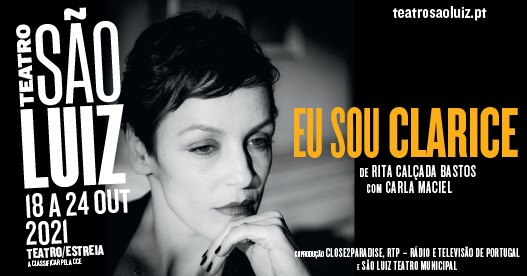 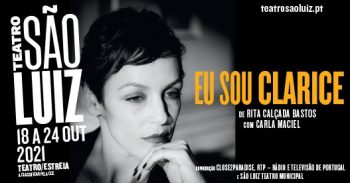 So, this one has layers, as evidenced by the following, rather lengthy synopsis, (courtesy of the organizers, but in English*):
“Eu Sou Clarice (‘I Am Clarice’) is the second play of a trilogy, which will end with À Procura de Chaplin (‘In Search of Chaplin’). The first, Se Eu Fosse Nina (‘If I Were Nina’), premiered at Teatro São Luiz’s online theater in March 2021 and crossed the character Nina from Chekhov’s The Seagull with the biography of the director herself.

In Eu Sou Clarice, Rita Calçada Bastos proposes to create a theatrical object based on the life and work of Clarice Lispector, a writer who has always intrigued her. This theatrical object results from the echo that this greatest writer has in her vision of life. The first time she became aware of her work was about 20 years ago, with the book The Hour of the Star.

‘I’ve always been interested in knowing who is the person behind a book: what are their concerns, what is their life experience and their understanding of it – in Clarice’s case, this was very present. The material in her writing is timeless because it comes from the human condition, from this thing of being a person,’ says Rita, who describes Clarice Lispector as ‘the stranger, the foreigner, the hermetic, the housewife, the writer, the mother, the person capable of dying here and there in order to succeed in being. To what extent is the boundary between biography and the work itself fading away? Isn’t the human being the object of deep unrest? And what does he do with it?’ It is from these questions that the director creates Eu Sou Clarice, a solo performed by Carla Maciel. ‘Clarice wrote in an overwhelming way about humanity, she saw with her childlike gaze everything that one can only see when one dies, and then, and only then, could she see the beauty of life,’ adds Rita Calçada Bastos.”

*You’ll need to falar for this one.