An event every week that begins at 09:30 on Monday, Tuesday, Wednesday, Thursday and Friday, repeating until October 19, 2019 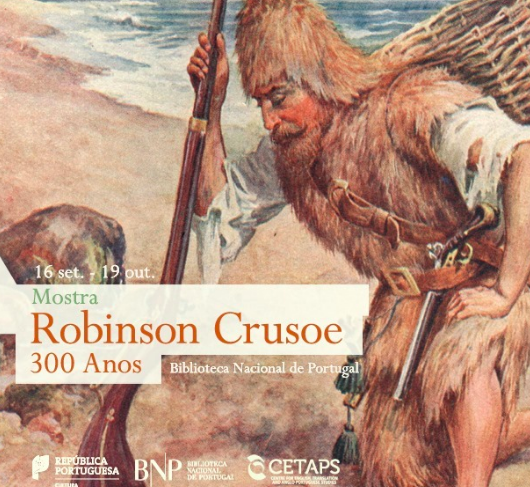 “It is never too late to be wise.”
Daniel Defoe, Robinson Crusoe.

Did you know that it’s been 300 years since Daniel Defoe shipwrecked Robinson Crusoe, thereby plunging them both into literary immortality?

Biblioteca Nacional de Portugal is paying homage to the classic novel throughout September and October, and here’s what we’ve gathered from them:
“Curated by Rogério Miguel Puga (CETAPS, NOVA FCSH), this show presents the specifics of Portuguese translations and adaptations of Daniel Defoe’s realistic novel, as well as the various visual representations of the global hero throughout the times.
This year marks the 300th anniversary of the publication of the novel – April 25, 1719 – which quickly became a symbol in world popular culture, inspiring (intersemiotically) novels, plays, children’s works, operas, films, video games, among other art forms, being rewritten, revisited, transformed, and commented on by authors such as Jean-Jacques Rousseau, Robert Louis Stevenson, HG Wells, EM Forster, Virginia Gold, William Balling, and countless others that force the hero to migrate across various languages ​​and cultures, including Portugal, as this show reveals.”