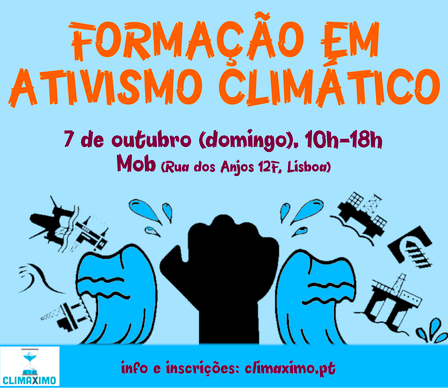 Do you love the planet? Do you hate capitalism?
If you answered yes to both, then this workshop might be for you.
From the organizers:
“Climáximo is an anti-capitalist collective that meets weekly to organize actions at various levels of the fight for climate justice, such as: fight against oil and gas exploration, actions by public transport, the Climate Jobs campaign and much more.
After the World March of Climate, which united hundreds of thousands of people all over the world, and many in three cities of Portugal, we will resume our activities in Lisbon with this Training in Climate Activism.
Sing up on the Climáximo website: https://climaximo.wordpress.com/2018/09/16/formacao-em-tivismo-climatico-2/

There is absolutely no controversy regarding what we know: global climate change exists, are leading us to a catastrophic future with such abrupt transformations that we can not even find a model that adequately describes them, but we will have to stop it as soon as possible to avoid the end of the world as we know it.

This is not a joke.

The resolution of the climate crisis is a race against time. In this fight against climate chaos, there is something called ‘too late’.

By “we”, we do not understand, of course, the 1% that controls more wealth than the “remaining” 99%. We understand “we”, those who have suffered and will still suffer from droughts, rising sea levels, hunger, hurricanes, forest fires and all the social conflicts that result from it all.

This training will include all the major aspects of this area, such as science and the history of climate policies, but there will also be room for discussion about what we can do in this fight.”

If you’re still not convinced, maybe man-bunned Leo talking to the U.N. can help.