Fernando Pessoa: A Freelancer in an Overcoat 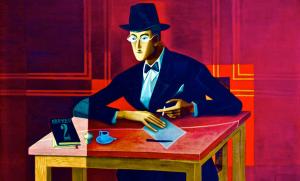 Fernando Pessoa is one of the most significant literary figures of the the early half of the 20th century whose writings has been translated into hundreds of languages. His famous black fedora hat and rounded glasses are printed all over souvenirs around Lisbon and his face etched into the 100 escudos bill, (the Portuguese currency before the euro). It was some
real going-out money once, although now the bill is only worth about 50 céntimos, which is ironically 5 céntimos short of a bica (cup of coffee) at a corner café.

Pessoa spent all his life living in rented rooms and writing in coffee shops like Martinho da Arcadia in Praça Comércio and, of course, Café Brasileira in Chiado Square. He would meet fellow writers at these cafés, but more often he was working alone, minding his own business, and doing his best to remain unnoticed. Now, his bronze likeness outside Café Brasileira is surrounded by bus-loads of people all the time. Everybody wants to be photographed with Pessoa, sitting in the vacant chair at his coffee table.The fact is, he doesn’t want you to join him, and he doesn’t want to be in your photo. 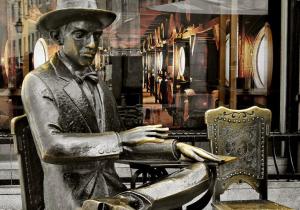 The poet prized solitude and introspection above all else. This is probably why one of his hands looks as if it’s moving forward to stop someone from joining him, showing them he is in the middle of something and can’t be bothered.

“I suffer from life and from other people… Only at night and all alone, withdrawn, forgotten and lost, with no connection to anything real or useful — only then do I find myself and feel comforted.” – Pessoa

Pessoa was a private man from the start and wanted his work to be done on his own terms. Until he was 18, he studied in South Africa, which is where he started writing short stories, sonnets, and free-verse poetry in English, under the pen names of David Merrick and C.R. Anon (and other variations of anonymous). Many of his poems were left unfinished,
but several were published in a local South African newspaper, a year before he returned to Lisbon in 1905.

He despised the idea of a permanent desk job, eager to be free to write when he wanted and under whatever name he wished — so it made sense for him to work as a freelance Portuguese/English translator. It’s also not surprising that Pessoa was a poor man for the majority of his life, bouncing across a total of 21 different firms throughout his career. But that didn’t stop him from having high-end taste in clothing and shoes.

Despite living paycheck to paycheck, Pessoa was always well dressed on principle. He favored black tailored three-piece suits, offset by his signature bow tie under a starched collar, and a long black trench coat in the winters. He was known to pair his meticulously-curated outfit with very nice shoes, always very well made and expertly polished. All of these iconic elements of his style and taste can be seen immortalized in the brass sculpture in Chiado.

What he wrote for himself during that time was, again, not under his own name, but pen names like Bernardo Soares and Álvaro de Campos, and 78 others. All of this work was hidden away inside a trunk in his apartment, with the exception of a small book of poetry called Mensagem, a handful of short articles for journals and magazines and two volumes of the famed modernist magazine Orpheu, co-authored (and funded) by Mario de Sá Carneiro. The third volume sat as a draft in Pessoa’s trunk for the next 69 years,
just enough time for the moths to completely devour his fine woolen suits.

When members of his family discovered his writings, they were finally published on a grand scale and Pessoa finally gained notoriety. It’s almost certain he wanted to be published
posthumously, considering his aversion to people and the spotlight. Can anyone actually imagine poor, shy Pessoa at a book signing for The Book of Disquiet (published in 1982) or for his tourist guidebook Lisbon by Pessoa (published in 1992)?

Pessoa himself wrote, “I’d woken up early, and I took a long time getting ready to exist.” He doesn’t say “getting ready” by accident.