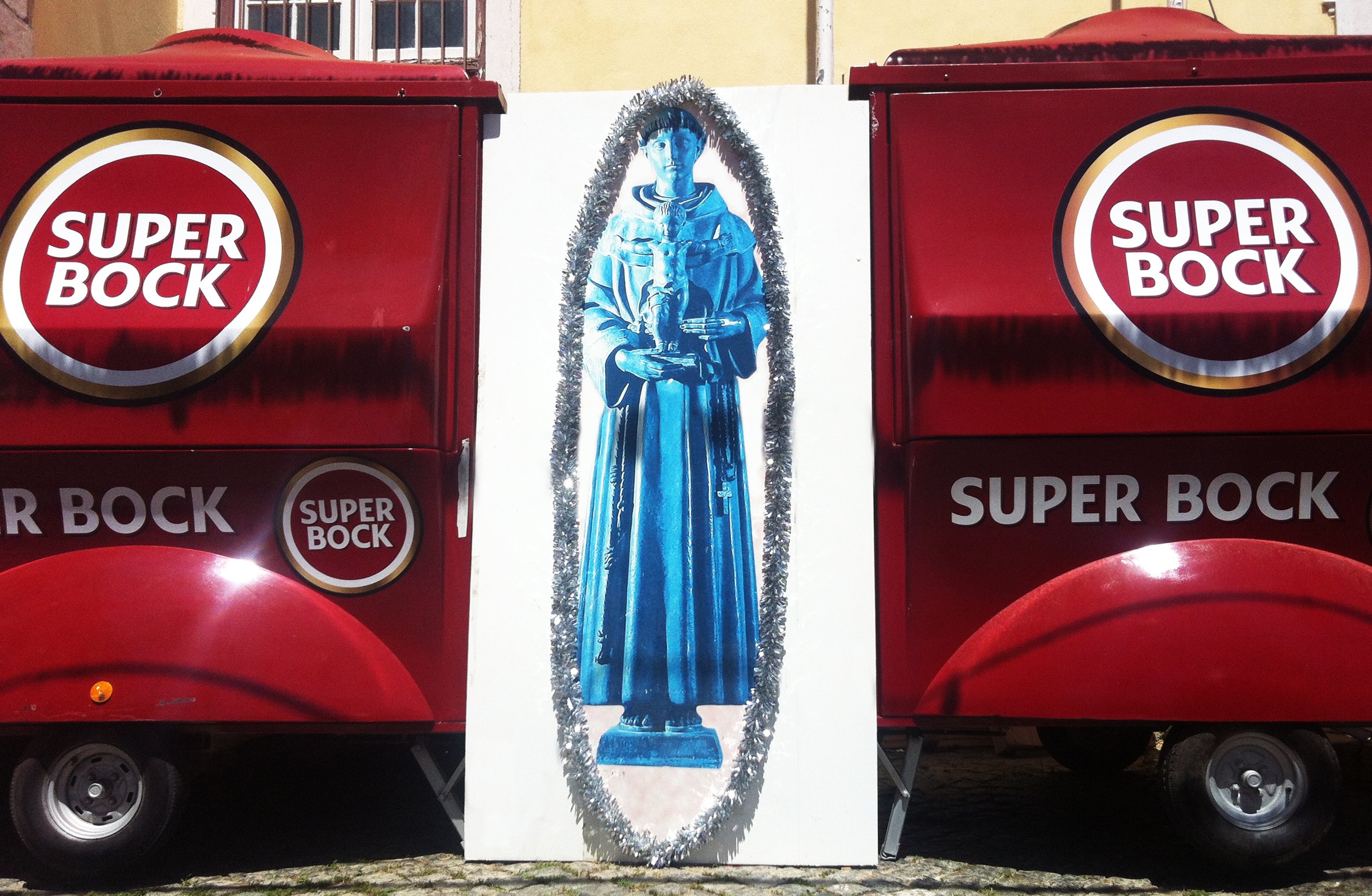 This year's festas de Lisboa are being treated as one big secret, but we've done the digging so you can do the partying. Here are the top events around town this year.

This year’s festas de Lisboa are being treated as one big secret, but we’ve done the digging so you can do the partying over the next four weeks. Here are the top events around town this year — if you can hit even half of them, your June is likely to be very full indeed.

There are some best practices for partying month-long, so word to the wise: find out what we’re celebrating and read up on our ten festas survival tips before you go. Boas festas, Lisboa!

June 2, 19h30 – 21h
OPENING PARTY | Praça do Comércio | FREE
The Gulbenkian Orchestra’s young musicians from the Orquestra Geração will be playing songs inspired by various periods in the history of mankind, marked by wars and the celebration of peace, which opens  Festas de Lisboa ’18.  The agenda includes the 1812 Overture by Tchaikovsky and the Star Wars Theme Song by John Williams.

June 4, 13h – 24h
STREET PARTY | Arraial at Santos-o-Velho | Santos | FREE
Farturas, bifanas, blood sausage, snails, the works, and it’s two streets long this year. Come watch the locals reclaim their streets from the typical drunken junior crowd hanging out in Santos. The older generation will team up with the thirty-somethings and show them how it’s really done: with live traditional music acts…not Ed Sheeran, thank you very much.

June 5, 18h30
LIVE MUSIC | António Chaínho and Marta Dias | Igreja de St. António | FREE
António Chaínho is known to some as the most notable ambassador of Portuguese guitar. With more than 50 years of experience in World Music, he joins Marta Dias, a Portuguese singer with origins in Goa and São Tomé. A night of fado, the mestizo timbre, and jazz can be expected.

June 6, 20h30
LIVE MUSIC | Peu Madureira | Cineteatro Capitólio | TBA
Besides his traditional fado, Peu Madureira will present some unpublished songs that will be part of his first original album. Since 2002, Peu has been considered one of the new ambassadors of fado, not only in Portugal, but abroad, having already performed in Spain, Cape Verde, Italy, and Romania.

June 8-10, 16h – 18h
WINE FESTIVAL | Alvarinho Wine Tasting | Carlos Lopes Pavilion, Parque Eduardo VII | FREE
The Alvarinho Wine Fest is back in Lisbon to celebrate the grapes from Monção and Melgaço. From the 8th to 10th of June, at the Carlos Lopes Pavilion, wines from over 30 producers are ripe for the tasting. There will also be producers of some of the best sausages, cheeses, and other delicacies of the region there to make sure you can stay on your feet.

June 11, 13h – 24h
STREET MARKET + PARTY | Arraial at Ribeira das Naus | FREE
This area always has the feel of a fair. It is where the youths gather, and cars — trunks agape — play loud dance music. This has more bright lights and burger vans, and fewer traditional tables and small bars. Expect the flashing Mickey Mouse ears and spin tops of Cais along with some balloons for good measure.

June 12, THE EVE OF ST. ANTHONY, 10h
PARADE | Marchas Populares Finale (Parade) | Avenida da Liberdade | FREE
This year is a lineup of over 20 different neighborhoods and guilds (for lack of a better word) so Avenida Liberdade will be teeming with gyrating paraders and cheering onlookers alike. If you’re into parades, this one is the closest to the Thanksgiving Day Parade in NYC, only…it’s oh so Portuguese.

The rest of the day/night is in your hands, but our advice if this is your first year is to attempt partying in Alfama. For those of you who have been there, try Bica. Last year it was pretty bumping.

June 13, 13h – 1h
STREET PARTY | Arraial in Graça | FREE
So, you’ve clawed your way up the winding hills of Alfama? Welcome to the (slightly) more relaxed arraial in Graca, where there are sardines galore and a nice family feel. With the festivities based mainly on Largo da Graca, you can easily slink off to the Miradouro to enjoy your festa with a view.

June 14, 13h – 1h
STREET PARTY | Arraial in Bica | FREE
Typically, when you mix beer and a steep hill with interspersed stairs, it’s a recipe for disaster, but luckily the friendly crowd will help hold you up. Gin and tonics, beers, shots, and sardinhas are flowing, as is more modern music from the various DJs on deck.

June 15, 22h – 24h
FADO | Carminho with Filipe Monteiro | Castelo Sao Jorge | FREE
Atlas’ favorite queen of Fado is performing alongside a local pianist sensation at the iconic St. George castle, for free! Tickets are available on the day of the show at the ticket office of the Castle or at the Fado Museum, starting at 20h.

June 16, 12h – 23h
STREET PARTY | Arraial in Madragoa | FREE
It’s likely you’re looking for something a bit more subdued at this point (at least if you’ve done it right) so this might be the time to visit Madragoa’s sleepier neighborhood block party. This one’s all about sitting at a table with friends and actually having a conversation, so brush up on our latest Week em Breve if you’re short on conversation starters.

June 17, 23 & 24, 16h30
THEATRE | Hamlet | LU.CA, Teatro Luís de Camões | FREE
This is one for the children, with Teatro Praga having two actors travel through the story of Hamlet in new, interesting ways. The idea is to engage the (young) audience and have them actively participate.

June 18, 10h – 18h
EXHIBITION | The Wonderful World o Mechanical Music | Museu do Fado | 5€
Why not take a break from the street parties and the pimba, and step into this exhibition based on the collection of Luís Cangueiro? Focused on Fado in mechanical instruments, this is here all month.

June 19, 10h – 18h
EXHIBITION | In the Footsteps of Saint Anthony |Museu de Lisboa – Santo António|3€
This photo exhibition opens on 19 June but will be running until September. It is a collection of pictures taken by Gonçalo Cadilhe as he followed the path of Saint Anthony through Morocco, Spain, Italy, and France, to name a few.

June 20, 10h – 18h30
EXHIBITION | Saint Anthony Throne and Figurine Competition|Headquarters of Associação de Artesãos da Região de Lisboa|FREE
Running until July 4, this exhibition/competition looks for people to create a St. Anthony throne and figure. It has been happening annually for the past 30 years, and it aims to “preserve the collective social and cultural memory.”

June 21, 14h30 – 17h30
DRAWING WORKSHOP | “The Sardine Atelier” with Madalena Matoso | Galeria Millennium, Rua Augusta, 96 | FREE
You’ll need to confirm your presence at this email address: ateliersardinhaATgmail.com, but the rest is up to you. Bring yourself and your kids if you’ve got them and learn how to design sardines like the pros. Madalena Matoso, from the illustration and graphic design studio Planeta Tangerina, will show you how.

June 22 – 30, 14h – 2h
CONCERT FESTIVAL | Rock in Rio | Parque da Bella Vista | 69€ – 320€
Headliners Bruno Mars and Muse are coming to Lisbon, not to celebrate St. Anthony, mind you, but to put on a show. Daily tickets are a bit expensive but if you’re supporting your favorite artist, then it’s worth it. Katy Perry and the Killers are headlining the festival on the 29th and 30th, so that might help you decide which weekend to save and which to rave.

June 23, 16h – 4h
PARTY | Lisboa Pride 2018 | Praça do Comércio | FREE
This is the biggest LGBTI event in Portugal. Since 1997 it has brought lesbians, gays, bisexuals, trans and the intersex populations together, in a celebration of pride and equality. Last year, 60,000 people from all walks of life celebrated together in the main square, so this is not to be missed.

June 25, 19h – 21h
LIVE MUSIC | Closing Ceremony: Summer Choral Festival| CCB, Main Auditorium | FREE
Things are starting to wrap up, and CCB hosts the final performance of the Summer Choral Festival. This is the culmination of four days of choral competition and includes the awards ceremony. Tickets are free but have to be collected from the box office, so make sure to get there from 5pm!

June 26, All Day
FAIR| Romaria de Santo Amaro| Capela de Santo Amaro | FREE
This is a five-day-long traditional fair in the Santo Amaro neighborhood. There will be music, dancing, food, drink, and a whole host of activities. June 26 is the first day and will feature the Marcha de Alcântara parade.

June 27, 21h30
THEATRE| Não Khalo (antestreia)| Casa do Coreto (Carnide) | FREE
Alice in Wonderland meets South American magical realism. This is not the structured narrative of Lewis Carroll, however, but rather the surreal universe of Mexican painter Frida Kahlo.

June 29, 21h45
OUTDOOR FILM| CineConchas: Baby Driver| Quinta das Conchas|FREE
Ok, this may not be the most prestigious of films. But, it is a free, open-air cinema where you can kick back, relax, and enjoy a night with your friends after a long month of partying.