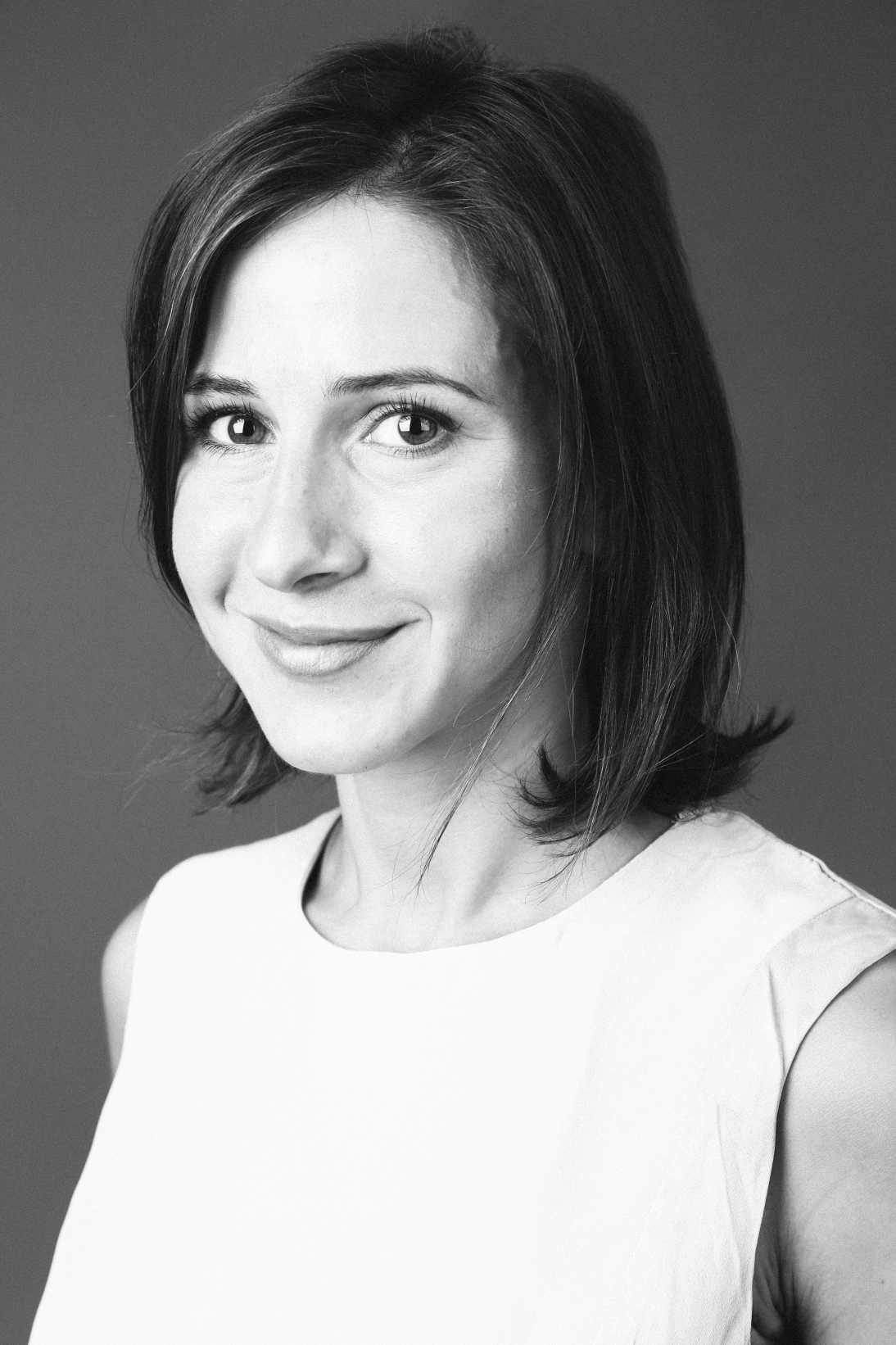 Flowers are her best lovers: Q&A with Weronika Anna Rosa

Polish artist Weronika Anna Rosa came to Lisbon and fell in love at first sight. When she moved here for good, the city's light and colors — and the country's azulejos — would shape her paintings as well. Atlas sat down for a chat.

Weronika Anna Rosa is a Polish artist based in Lisbon. On the day we meet, she enters the cafe like a hurricane and announces: “I have to show you something!” She then takes out her phone and explains: “I’ve been on the other side of the river to scan my works. And I have a video. Just look at those machines!” But, though impressive, they can’t hold my attention — in the foreground, one of Weronika’s floral patterns is slowly unfolding, like an enchanted scroll heralding the wonders of her upcoming exhibition.

It’s been two years since you decided to abandon Warsaw and move out to Lisbon. How did it all begin?
The first time I came here was over seven years ago, just for a holiday, and it was love at first sight. Funnily enough, people kept on taking me for Portuguese, mostly because of the appearance, but also the surname, Rosa, which turned out to be quite common in these parts. Such coincidences, along with the inner harmony I was feeling, made me wonder whether a bit of Portuguese blood wasn’t secretly running through my veins.

I came back for a holiday again and the same thing occurred. For this reason, and as the borders were open and back in Poland I was constantly lacking sun and aesthetical experiences, I decided that maybe Portugal should be a place to stay a while longer. In 2016,  as I was about to finish my M.A. in History of Art, I applied for the Erasmus scholarship, and then never went back.

Do you remember what the very first thing that made you fall in love with Portugal was?
Azulejos, no doubt about it. When I came back from my first visit here and was showing photos to my family and friends, everyone laughed at me — there were over 500 pictures and all of them were of the colorful tiles. But to me, it was something refreshing, something that I’d never seen before — at least not on such a scale and in so many tones and forms.

It seems that this early fascination continued, as one of the projects you’ve been involved in lately was the restoration of azulejos panels. Could you tell me something more about this experience?
Before coming to Portugal, I had already completed some ceramics courses, both in Poland and France. Then, which probably won’t be a surprise, my final dissertation was centered around azulejos. 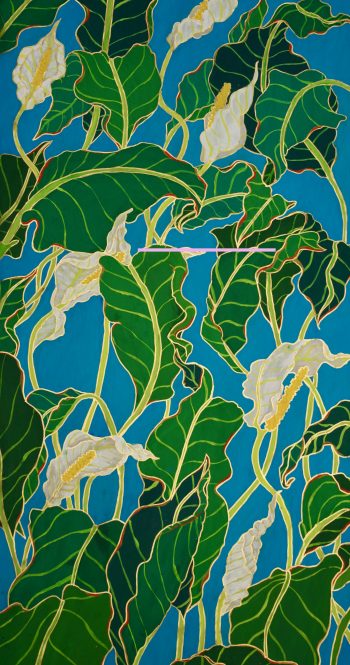 During my Erasmus exchange, I enroled in some classes held at the Faculty of Fine Arts and this helped me to get in touch with the local restoration community. The first project I got involved in was reconditioning of the 17th-century panels in Santo Estêvão chapel in Baleal. For over a week, I was working in a building closed to the public, accompanied by a lady with over 30 years of experience in renovation of art, and I have fond memories of that time. As the chapel is surrounded by water, the only things we could hear were the waves and the seagulls. All was a white-and-blue meditation and I think that only then did I realize how many possibly-impossible hues exist within such a limited scale and how hard it may be to mimic them on a palette.

Thanks to this experience, I got involved in another project, this time in the Alentejo. Once again, it was working in the middle of nowhere, or, to be more precise, in between the fields, horses, bulls, and flowers. The tiles originated from the 20th century and were centered around hunting and bullfighting scenes — things strictly related to this part of the country — and the patterns were derived from the paintings of a Portuguese artist who owned the house we were working in. Again, the colors matched the landscape, as the greens and yellows were dominant. Interestingly, this made the restoration process even harder, as the shades were playing with one another, producing tones that often demanded the mixing of the least expected pigments.

What is striking in your works is the great receptiveness to the changing colors and shapes of the landscape. Was it precisely the local nature that served as an inspiration for your own artwork or was it rather the reminiscence of the Polish plants and folklore?
I think that the admiration and respect I have for the plant world comes from my early childhood. In each plant, I seek original forms and new textures or color schemes. In this sense, the local nature was, up to a certain point, inspiring.

Unfortunately, I think that even though Lisbon is a colorful city, it’s not a green one. There are plenty of pleasant squares, but the parks are disappointing to me. What I find most inspiring are the colors of the architecture. Compared to Warsaw, Lisbon is incredibly vibrant and full of unobvious combinations, including the ones that on the color palette seem to be in discord but in real life are captivating. The ugly easily becomes charming here and, for that reason, every day I come across something that catches my attention, makes me fall in love, and boosts my imagination.

What’s your creative process like? Do you usually take life drawings or prefer to use photographs?
I’m addicted to buying flowers, it’s my Saturday ritual. While most of my works are based on the plants that I can observe in nature, the series that I’m about to present consists of flowers that I could purchase and bring home, like dahlias, and the ones that I could sketch directly in their natural habitat, like water lilies.

Since I’m mostly interested in the unique rhythm and language of each flower, my works are more like psychological portraits than botanical illustrations.

And what about the technique? 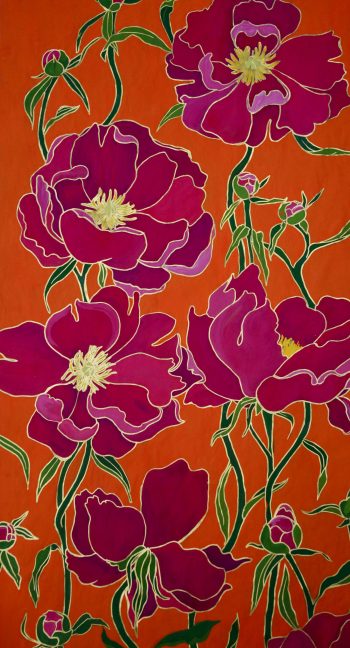 All of the floral panels have dimensions of 150 x 50 cm, so similar to the dimensions of designer wallpapers, and are painted in gouache on craft paper. The choice is inspired by silk painting, although, since it’s also a type of paper used in industry for creating packages, I wanted to show it as a particularly delicate matter, one that is smooth and lustrous, that enhances colors and gives richness to the paint’s texture.

What kind of works are you about to present at your upcoming exhibition?
The exhibition – which will have its opening on September 27th, at 7 pm, at Galerie La Canopée – will consist of 11 floral panels, each with a title derived from the Latin name of the plant. Apart from that, I’ll present some sketches that are a more impressive and expressive way of capturing the flower’s unique character.

And where did the idea for the exhibition’s title come from?
The word “vivace” comes from Latin and relates to three different contexts: the subject matter, the idea of the exhibition, and the linguistic connotations.

To me, the Latin language is strictly related to everything that exists in nature. The first contact I had with the plant world was through herbariums, where each specimen is described through its Latin name. The term “vivace” is used in botany to characterize perennials (plants that produce new seeds, tissues, and flowers every year). In musicology, it is used to describe a lively, spirited tempo. Interestingly enough, until the 19th century, it would only appear as an annotation for the pieces dedicated for dancing. Finally, it refers to anything that is vital and evolves over time. And it may be precisely this last aspect that differentiates the upcoming exhibition from the previous one. Before, it was the finished blossoming that interested me most. Now, it’s the pullulating that comes into focus.

Where did this change come from?
That’s a good question! Maybe it was a psychological change? Or just the Portuguese sun? To be honest, I have no clue. Especially because when I came up with the idea for the exhibition, I was under the influence of 17th- and 18th-century still lifes. Yet, somehow, my own art happened to express itself through far more lively colors.

I think that it was also the simple joy of painting. Since music is an integral element of my creative process, it may have influenced it as well, considering that this year was full of tangos and classical music under the directive of “vivace.”

What are your further plans?
There are always too many and the time is always too short. But I would definitely like to turn my floral designs into wallpapers and textiles. I also hope that thanks to the exhibition, I’ll establish some new contacts within the creative industry. And, by now, that’s all I could wish for.