Francisco Pinheiro: Standing on the Divide of “Clinamen”

What do you get when you mix a dried-out cactus, a white elephant, and a motorcycle hub? Some would say a Dadaist’s utopia, but others might beg to differ.

The Lisbon-born artist and Fullbright recipient Francisco Pinheiro is showing his most recent work inside the Águas-Livres 8 Gallery in Amoreiras. The eight pieces inside have been inspired by the fine line that divides that which is natural, and that which is human.

The show, entitled Clinamen (as Pinheiro describes it, it’s when there’s a pattern to things with a slight deviation), is comprised of found objects, re-interpreted maps, accidents, natural growth, and collected cement bric-a-brac, for lack of a better term, so we checked it out and went on a tour guided by the artist himself. 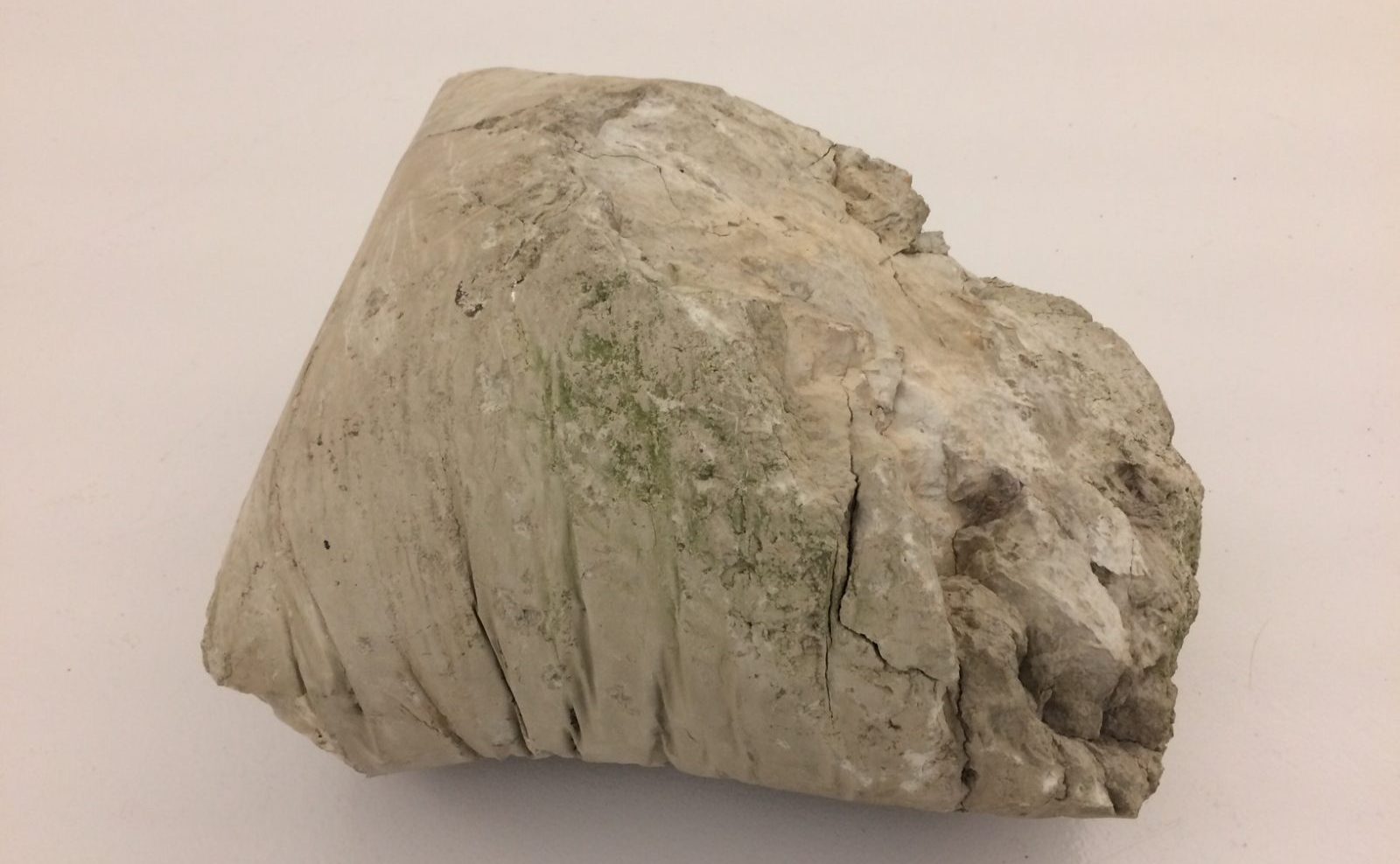 Pinheiro spent a lot of time in California and did a lot of hiking there. He brought his love of exploration back home and started hiking in Monsanto, a place he says can be “disorganized and at times difficult to access.” It was here that his collection began.

He discovered what looked like a rock, but upon closer inspection turned out to be cement in the form of a bag. This piece, Meteorito, now greets you from the floor as you walk in, striking the same feeling of wonder that he must’ve had when finding it. Pinheiro said, “Confusion is a necessity…this piece plays on the divide between what is man-made and what has been formed over time by the elements.”

We moved on past a paper funnel created by the artist that propped up a dried palm frond, or something resembling it. The combination was intended “not to replicate nature, but to dance with it,” according to Pinheiro. The lightness of the dance was breathtaking.

Sitting on the next windowsill over was a rock that resembled a cluster of blueberries. The artist explained, “I found this in a container at a construction site in Graça. This object made me think: what is it made of exactly? Maybe I should send it off somewhere and find out!” He hasn’t sent it anywhere yet, but you’re welcome to take a guess. 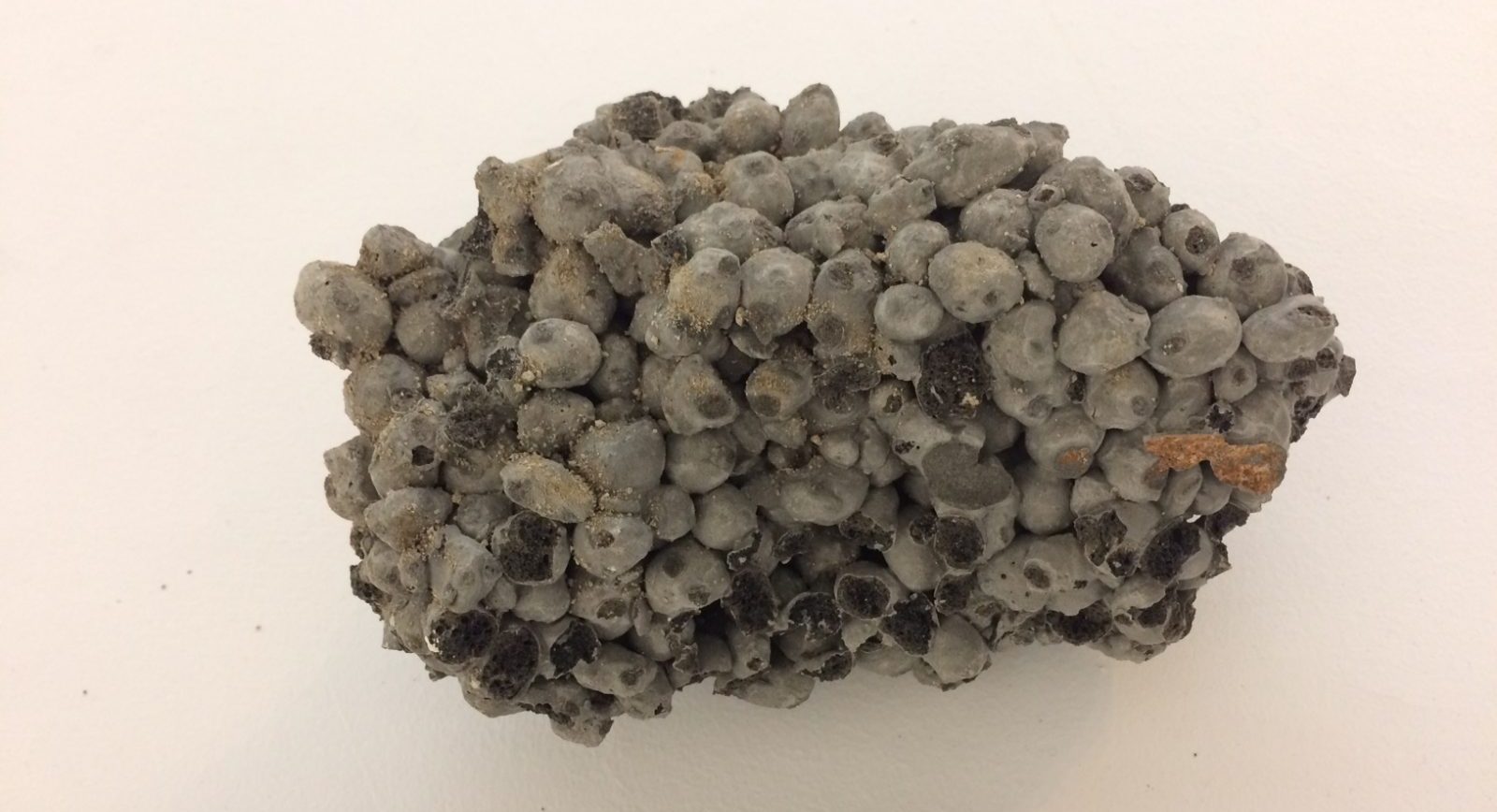 The next piece was comprised of a discarded motorcycle hub filled with crushed-up blue soap chips, which Pinheiro said “gives a geological feel to something very common. The ultramarine blue pigment was the last to be made by humans, so I used the bright blue soap as a reference to this rare pigment.” It was this piece that marked the entrance into what he calls Epicurio’s Garden.

Epicurius was a Greek philosopher who the artist describes as “intent on being happy, being playful, and held the belief that humankind should avoid pain. My process of playful collecting took this idea to heart. I didn’t question it too much, under the assumption that these things would work together naturally in the end.”

The motorcycle hub was situated in front of a curved cane that was leaning against the far wall of the gallery. The cane was connected to a sphere on its right by a naturally-occurring crack in the wall. “These objects are mysterious, I mean, you have to ask yourself: how did they end up there?” 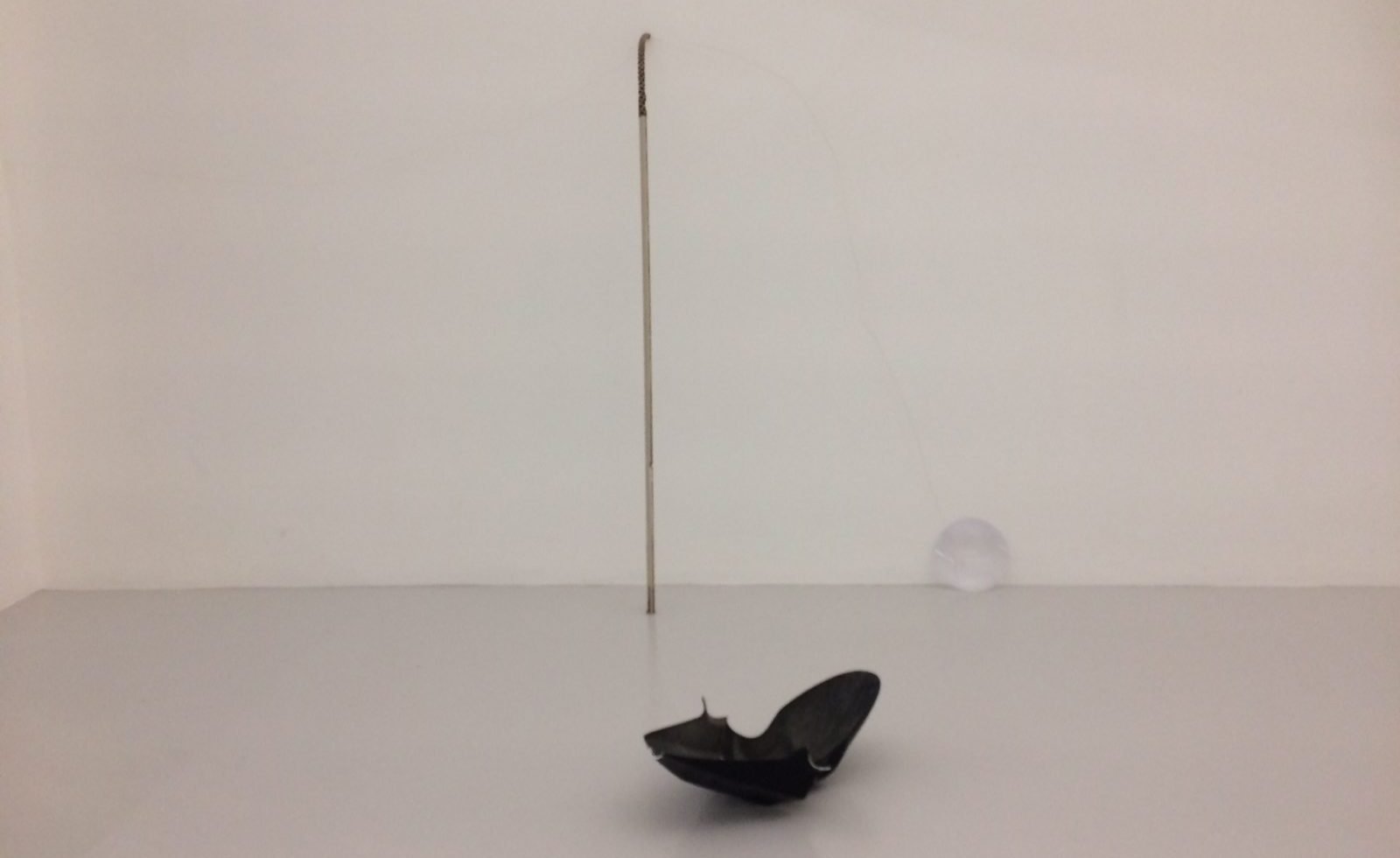 A hallway to the right of Epicurio’s Garden leads us to another large room. On the corner of the hall, there was what seemed to be a large mushroom growing out of the wall. Upon closer inspection, I discovered it was a dried cactus. “That cactus dried for about three years in my studio. It got a durable quality to it as it dried and became quite resistant. Actually, an arm started to grow from it as it was drying…it was always seeking life!”

The largest piece laid ahead of us: Dragão Branco (White Dragon). “This piece reacted to the space and therefore developed its own personality,” Pinheiro says. On the ground was a swirl of folded paper revealing two images compiled into one and, depending on where you stand, you can see either one or both simultaneously. One image is a compilation of satellite maps showing exaggerated and slightly re-imagined mines in Arizona, Iraq, and Mozambique. The image on the other side is a series of artifacts photographed from Lisbon’s own Gulbenkian Collection. 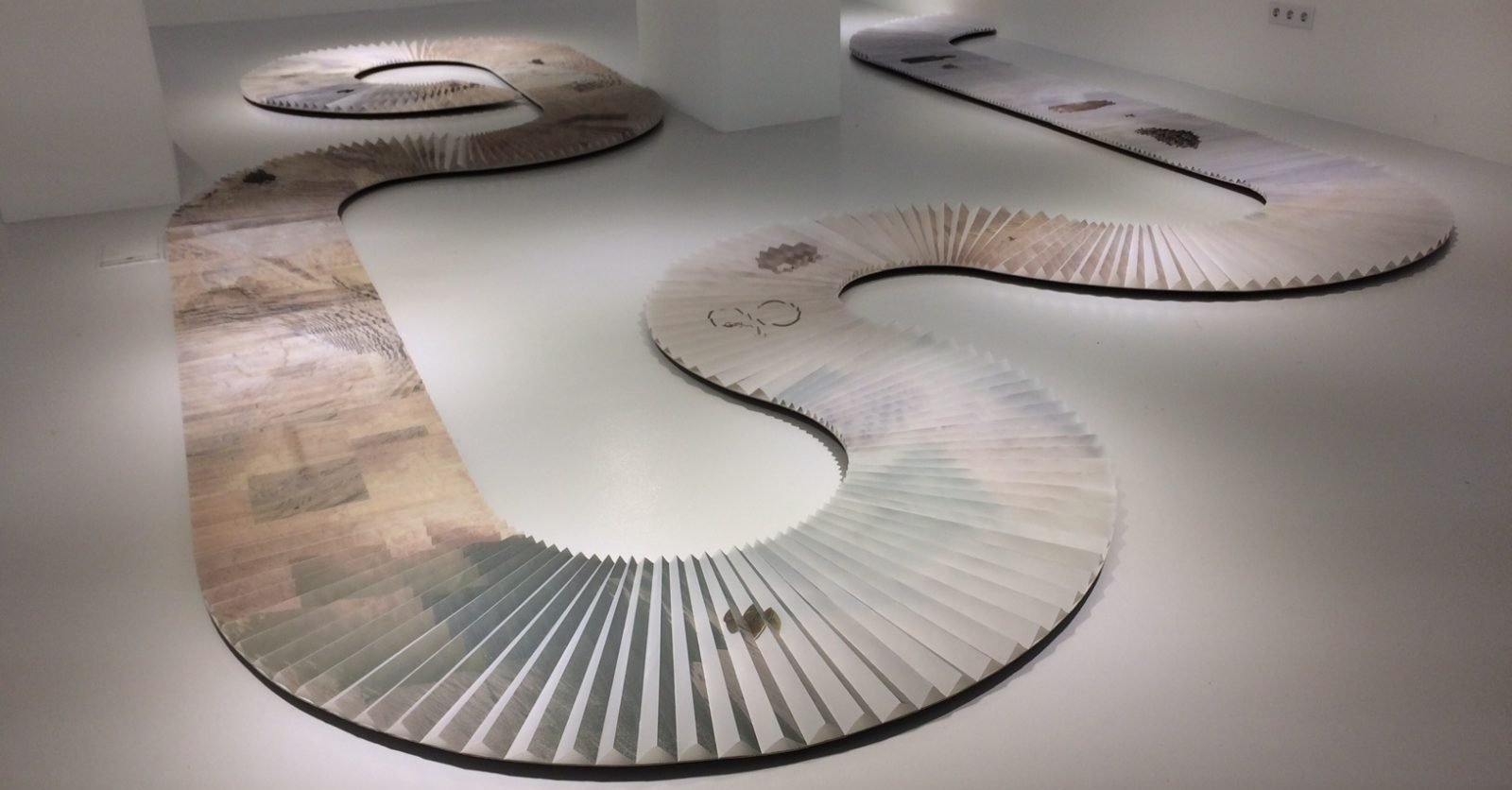 “You know where the money came from to fund the initial collection, don’t you?” I nodded. Gulbenkian was responsible for founding the Royal Dutch Shell Oil company. “The white elephant in the room is that sometimes, we don’t really want to see where things are made and how they’re done.” What you experience with this piece is a duality between these precious objects and the ugly truth behind them, though the artist claims that it’s not meant to be a political piece.

We had reached the end of the exhibit, so I asked Francisco to tell me his thoughts on the art scene in Portugal. He said, “It’s experiencing an interesting boom and there’s something frenetic in it: sometimes it feels like its focus is on the artist, and other times it seems to be built on protocol. Sort of like punk versus tradition. Maybe we are being too academic when we should be more rebellious. Artists nowadays spend too much time emailing when it’s more important for them to just go for a walk.”

Like the work? So do we. That’s why we are excited to announce the publication of Pinheiro’s book, Kamal (left), supported by the Fundação Carmona e Costa and published by Sistema Solar. The official launch of the book will be on January 20, 2018, so stay tuned for details or follow Carmona e Costa on facebook for more information.