It may be hilly and bumpy, but bike lanes are popping up in LX and we’ve got maps. 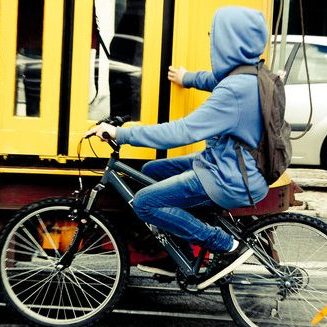 Helmets, headlights, taillights are highly recommended, although not required by law. Since the drivers have trouble playing it safe during the daytime, you might want to have them.

Police and Taxis. Unlike, say, New York City, the Lisbon police do not hate cyclists and are unlikely to bother you unless you’re provoking them. Like NYC, the cab drivers usually feel like you’re on their road and will sometimes let you know.

Civilian Drivers. Portuguese drivers aren’t known for their patience or accuracy, but they’re improving, and while they’ll probably drive you off the road, they will also apologize once they realize it.

Street Riding. If you plan to go off the bike path — and unless you have a bike rack, you definitely will — make sure you are comfortable with urban cycling and how your bike handles on super-steep hills (brakes!) with cobblestones (seat!). If riding thin wheels, careful with the tram rails. No, really.

Theft. If it’s a beater, probably not, unless you’re in a really desolate urban oasis. If it’s carbon, better have one of those Fahgettaboudit locks. Or a boat chain, which is what Atlas correspondents use (for their 1983 Peugeot and ’95 Orbita, see you on the roads, suckas!).

Misc. The spandex thing is up to you. It’s quite “in.” Unfortunately.

Bike lanes in Lisbon are still very disconnected, but there are plenty of them and new ones being added. Check out CicloviasLX for the latest. But it’s best to plan out an

off-the-bike-path route in advance so you can avoid “shortcuts” that take you all the way up just to go all the way back down again. These hills are not to be taken lightly. See also Lisbon Cycling Route map, which can help you plot out your distance, note elevation gain, and find closest bike paths.

Metro: During dias uteis (working days) you can bring your bike on the metro only after 20h.

Commuting trains like the CP Comboios: No (enforced) bike regulations, typically two bikes per car. Just try to avoid rush hour, including to and from the beach…

Bike Buses: There are supposedly 6 lines of the public bus Carris in (on?) which you can put your bike. Atlas has never seen one. It’s like a unicorn.

Atlas teams up with BikePop for a tour of Lisbon’s Ruins. Read about the route here on the blog.

Belém Bike (Av. de Brasília, just east of Museu da Electrecidade on the waterfront, 937 406 316, Mon – Fri, 10h30 – 19h; Sat – Sun, 9h30 – 19h) is a container pop-up of the Without Stress store in Chiado, but it’s pretty full-service, with a line of rental bikes (and pedal carts for kids) and knowledgeable staff who can fix your bike quickly and professionally, even with used parts if you’re on a budget. Rentals start at €20 euro for 24 hrs, or 50€ for 5 days, with discounts if you book online.

Caiscais. Want a bike for 3,50€ for the whole day? biCascais (Largo Estação, Cascais – keep scrolling west on the map) lets you rent one (after you show them a photo ID) from several kiosks around Cascais, open 8h-19h (9am on weekdays sometimes, it varies…). The kiosk across from the train station usually runs out in the first hour or so until after 14h, but the new location on Avenida República (38.694759, -9.422049) has loads more. The bikes have baskets for your sunscreen and beer and are mostly in newish condition, but check the breaks and tires anyway before moving. They’re perfect for the 10km ride to Praia Guincho, with a beautiful paved bike lane and plenty of excellent stops, like Boca do Inferno (Mouth of Hell!) and Farol Da Guia along the coast.

Tejo Coast. One of the most splendid rides in town is the waterfront route from Parque das Nacões, by the Vasco de Gama Bridge in the east, to Belém, which takes you along the Rio Tejo on a (mostly) shared bike-pedestrian path (you have to walk the bike in Docas of Alcântara). And you can continue past Belem to the Champalimaud Center Center for the Unknown, a stunning futuristic public space with a cool café. You can then ride east past the Center, again on the footpath or the road, and re-connect to some nice bike-riding space along the waterfront after Algés. That road will take you on a delicious adventure as far up as Caxias. Past that, you’ll have to negotiate very narrow sidewalks or car traffic, but plenty of cyclists do it all the time. Just be careful, and — helmets.

Park Riding: Monsanto. If you have an off-road trip in mind, try out Monsanto, Lisbon’s lung, a huge park with windy paths, trails, forest, and beautiful views — and is home to more than 42 kilometers worth of bike routes, both asphalt and earth. It’s also a maze if you’re not careful, so take note of all the signs you pass and get (or print) Monsanto’s map beforehand. Want something epic? Try this 65-km route.

City Riding. You can also skirt Monsanto on a much flatter bike lane that starts at the top of Parque Eduardo VII and hugs Monsanto along the east and north side.

Riding to the Beach: Caparica. One of the most rewarding experiences is riding your bike to the ferry, getting over to the south coast of the Tejo to Trafaria, and riding to Costa da Caparica for a beach day and the best Mexican food in the country. If you’re made of tougher stuff, tackle the traffic and the intimidating hill that will take you into the national park and eventually to Fonte da Telha, where if you’re really hard core, you can walk for an hour for a free mud bath.

Atlantic Coast Beaches: Cascais to Praia do Guincho. It’s also easy to get your bike outside of town with the help of the train. Take the CP Comboio train from Cais Sodré to Cascais and ride all the way to Praia Guincho for a little seaside coasting with a beach at the finish line. Don’t have a bike? Rent one in Cascais at the BiCascais kiosk, just bring a photo ID.

For many more routes — in fact, for pretty much all of Portugal — check out Ecovias by Paulo Guerra dos Santos.