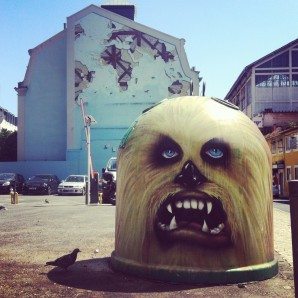 Recycling in Lisbon:  In order to make recycling even sexier, Lisbon has an artist program to paint the glass recycling boxes and garbage trucks themselves. 3,000 artworks have been submitted for selection for the 10 garbage truck spots and 400 glass recycling containers in Lisbon. The project was conceived by the Galeria da Arte Urbana who has teamed up with Torke+CC to continue their artistic crusade, having now spread to the decoration of two DS3 Citröens lent by the maker to be decorated by two famous Portuguese street artists.

Lisbon received the European Green Capital Award and has become a national example and leader in waste collection, but there’s still a lot of progress left to be made. Currently, incineration with energy recovery is the main treatment method for all garbage in Lisbon. 10 percent is land-filled, and only about 18 percent of the total solid waste is recycled or recovered. We still have a long way to go.

Portugal ranks 5th in the EU with the highest quota of renewable energy according to Diario Noticias. 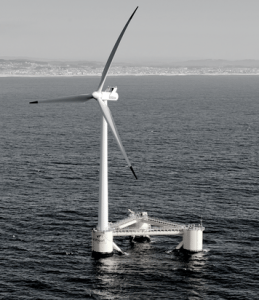 Wind Power:  5km off the Portuguese coast of Póvoa de Varzim, Portugal has built a floating wind turbine steadied by a triangular yellow platform – one of the frontrunners in a global race to conquer the wild and somewhat unpredictable oceans in order to harness the strongest winds on the planet for the sake of 50% more efficiency.

Other water-based turbines exist, however, their foundations go all the way to the ocean floor (at a depth of sometimes more than 40m) which makes the building and installation that much more expensive.

This Windfloat turbine is the second floating turbine to be put out to sea and has already survived a rather choppy winter of storms which resulted in massive waves. Surfer Andrew Cotton experienced one of these in person this November as he tackled (and tumbled) a 60 footer in Nazaré.

Principle Power’s consortium, which includes EDP and Repsol, have won a promised €50m of EU support to continue the project. Their future plans involve the construction and delivery of 3 or 4 more in 2017. Currently, they are raising the €100m needed to proceed. Jorge Moreira da Silva, Portugal’s energy and environment minister, is at the helm to make Portugal a key supplier of green energy to Europe.

It is a win-win: citizens get cheaper energy and it is good for jobs an investment in Portugal too.

He said in an interview with the Guardian, “We will be able to produce it at a lower cost as we have better wind and sun than other countries. It is a win-win: citizens get cheaper energy and it is good for jobs and investment in Portugal too.”

So what can you do to help out?

Repurpose: Take a cue from Gezo Marques, a Brazilian artist living here in Portugal. He follows the phrase “one man’s trash is another man’s treasure” to the letter. Using found objects from the street, he turns them into works of art, furniture, chandeliers, you name it.

It seems that his eye is always open for discarded wood, plastics, magazines, basically any old junk most people would walk right past.

See more of his work here on his website.

Volunteer: Freecycle.org builds a worldwide gifting movement that reduces waste, saves resources and eases the burden on our landfills. With over 5,000 groups of 7 million members, people can give (and get) stuff for free. There are tons of ways you can get involved: Offer a skill, help moderate, help in disaster relief, and more.
Get involved: The European Week for Waste Reduction in May has organized several clean-up campaigns in Europe over the past years to tackle the litter problem. “Let’s Clean Up Europe!”, is an EU-wide event that takes place on the same days all over the continent, involving and reaching as many citizens as possible.