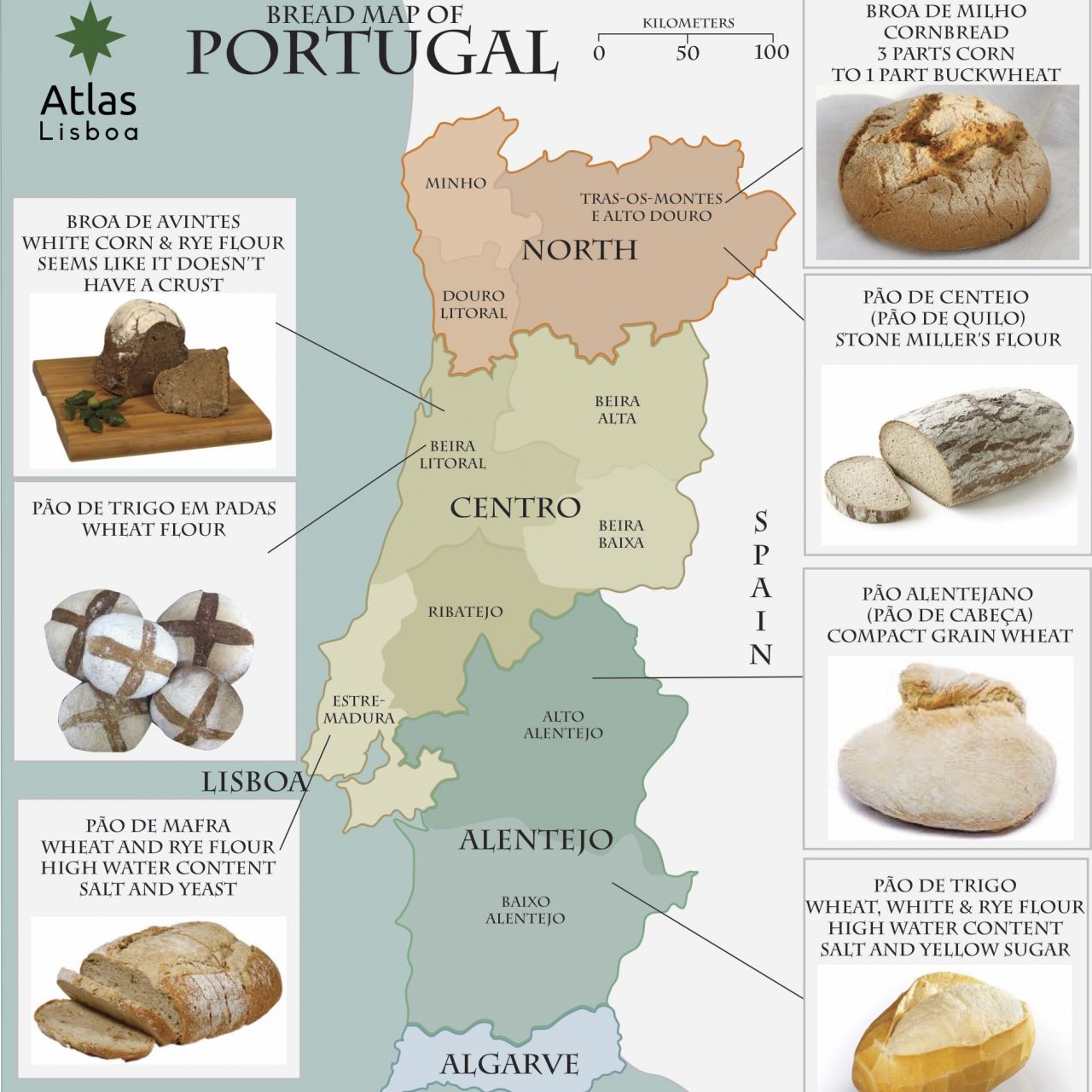 Baker’s Dozen: A Guide to 13 Portuguese Breads and Treats

Even if you’re on the Atkins diet, there’s no way to avoid sampling at least one baked good here. They’re everywhere. There’s an obligatory basket of bread on the table at every restaurant (usually for an extra 1€ or 2€ if you decide to dig in). There’s also a pastelaria (pastry shop) on pretty much every corner of every town, which, on the negative side, has given Portugal one of the top four highest levels of diabetes in Europe (Turkey is the top one, so the Mediterranean diet maybe ain’t gonna save ya).

The choices at these cafes can be overwhelming. There are savory croquettes stuffed with shrimp or leitão (suckling pig), because the Portuguese love their salgados (salty, usually deep-friend things involving batter). Then there are the mildly sweet pecan tarts, respiros and suspiros (airy egg white merengues), revving up in sugar content to opulent birthday torts and colorful cream-filled cakes that will keep your dentist busy for the next few months.

But what should you choose? Where do you start? Atlas is here to help you sort out your sugar and pastry fix. Here are 13 of the yummiest traditional baked delicacies we’ve encountered.

Wheat grows very well in Portuguese soil (though it can be more challenging in the north), so each region has had time to perfect its own specific type of bread. Here’s a handy-dandy map that Atlas whipped up to help you make the right choice and pronounce it halfway correctly if you’re just getting started. You won’t want to miss any of them. 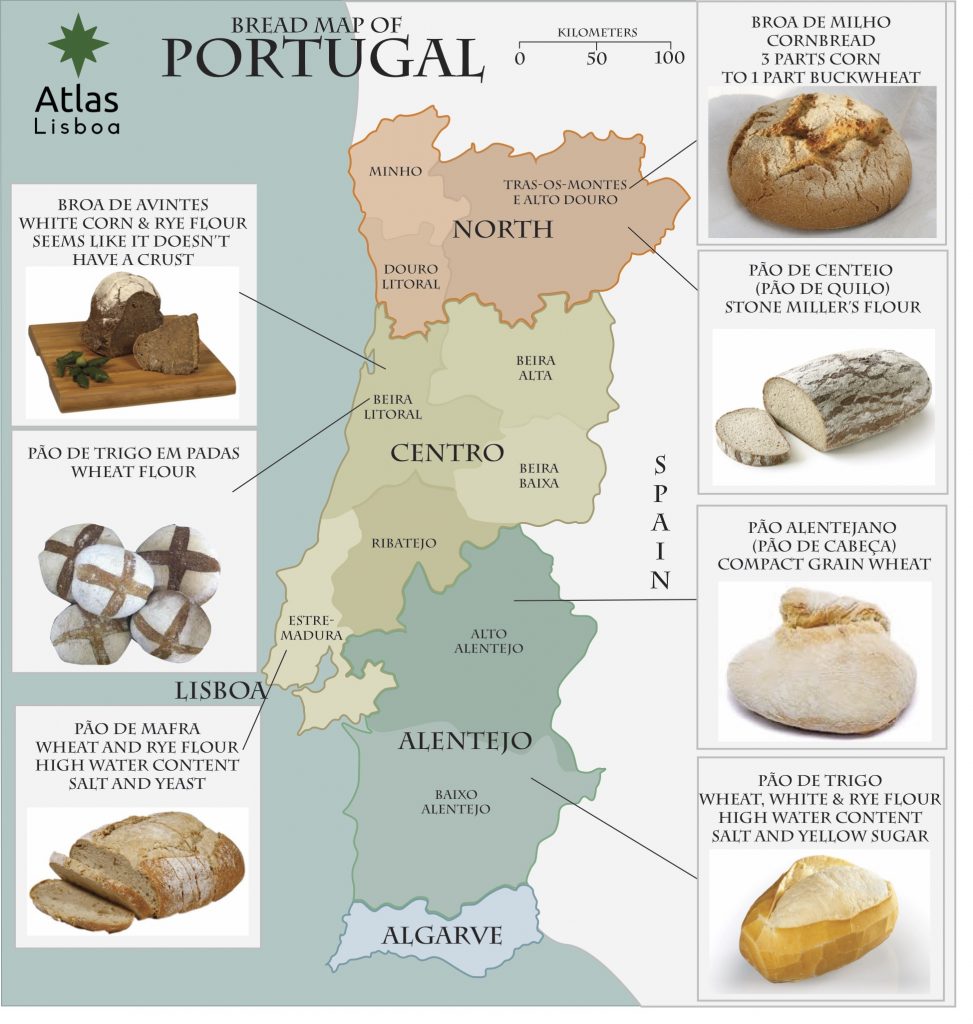 Pão com Chouriço: This is to the Portuguese what hot dogs are to Americans. It’s made by whipping the flour in a machine first, and then shaping the dough loaves around a piece of chouriço and baking it in a wood-burning oven. They’re common during footie matches and festivals, and are especially popular in the early-hours of the morning among inebriated party animals as they make their way home from wherever. Best eaten aside a bowl of caldo verde ( soup made with Portuguese kale) and a chilled rice pudding. All of which you can have, with another beer if you still need it, for under 6€ at A Merendeira. There’s a few around, with the Santos one winning in the best-dressed but most-red-eyed client category.

Merenda: This soft baked flaky bread is made with ham and cheese and/or chouriço. It’s a staple for breakfast around Portugal since it’s basically a sandwich ready to go on a subtly sweet, subtly puffy pastry dough. Also known as a folhado do carne when stuffed with ground beef, it was traditionally served as an appetizer in the colder months, especially around Christmas, but now it’s that thing inside the case that we point to nine times out of ten, whatever time of day the urge strikes for a snack. It is best paired with a sumo da laranja (orange juice), which almost all the pastelarias in Portugal squeeze fresh if you ask, or just a plain old espresso (as if!).

You can’t walk down the streets early in the morning without the mouth-watering aroma of freshly baked pastries wafting through the air. In fact, the pastry shops that make their stuff on site wear it like a badge of pride on their signs out front: fabrico próprio. Here are some of the more traditional pastries and a bit of the history behind them.

Bolo de Ferradura (horseshoe cake): This sweet bread from Ribatejo carries hints of lemon and anise in the combination of white and corn flour. It’s also called bolo-de-noivos  (bride and groom’s cake) because the horseshoed-shape pastry is normally given by the bride to her wedding guests, since they are said to bring good luck and prosperity. It was traditionally made with sourdough, since artificial yeast was invented way later than the original recipe, so the crumbs are compacted and the consistency is moist if it’s made to traditional standard.

Pão de Deus: This is a slow-rising sweet brioche roll made from eggs, butter, sugar, and milk topped with coconut. It’s a very typical breakfast roll dating back to the 15th century, historically made in convents all around Portugal. On All Saints Day (the day after Halloween), there’s a version of of trick-or-treat played by children where they go around asking for pão-por-deus (bread for God’s sake). In return, the adults typically bestow them with “broas de pão-por-deus”, which are slightly different from the original pastry in that they are smaller and they come with raisins, anise, or pine nuts inside. (Other times they just give money or candy.)

Pasteis da Nata: In Belém in 1837, the clergy of Jerónimos Monastery (in an attempt to make a buck or two) put up the egg custard tarts they made for sale. Later, they sold the secret recipe to Pasteis de Belém. The recipe has never been written down and has been passed orally from one head baker to the next ever since. You can still buy and enjoy the original recipe at this most famous of pastry shops, if you can stand to wait in the humongous line of tourists. Hint: enter through the cafe side and wait for a table instead. There are so many in there that one is bound to become available within minutes. Sit down, be served, and eat your baked goods while the hoards outside get baked in the sun.

Ovos moles de Aveiro: Translated as Aveiro’s soft eggs, these sweets were originally made in convents, as  most Portuguese confectionery delights were initially. Until the 19th century, the nuns used the egg white to starch their habits and the yolks were mostly discarded. In a convent in Aveiro, the nuns saved the leftover yolks and used them as a filling for wafer-thin sea shell (or other shape) casings made mostly of sugar. There are women in traditional clothing still selling these sweet eggy explosions at stations along the Porto-Lisbon railway.

So, What are you waiting for? Get out there and try something delicious. Atlas recommends visiting Confeitaria Naçional in Baixa or Pastelaria Versailles in Saldanha to sample your sweets. Their selection is massive and they know what they’re doing. The best news is, you won’t spend a lot of dough.