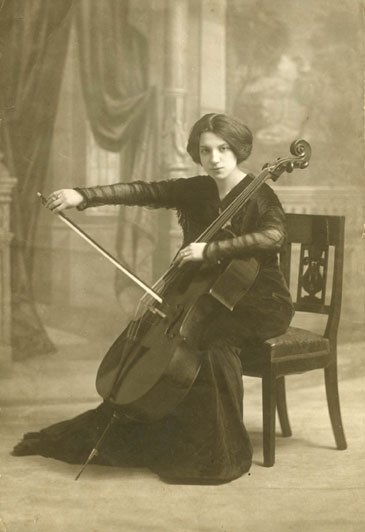 In her hometown, Porto, the cellist Guilhermina Augusta Xavier de Medin Suggia was affectionately known as "the eccentric Englishwoman." This nickname, earned by someone who was, in fact, flesh-and-blood Portuguese, reflects the extent Suggia was ahead of her times — as a cellist and as a woman.

In her hometown, Porto, the cellist Guilhermina Augusta Xavier de Medin Suggia was affectionately known as “the eccentric Englishwoman.” This nickname, earned by someone who was, in fact, flesh-and-blood Portuguese, reflects the extent Suggia was ahead of her time — both as a cellist and as a woman. 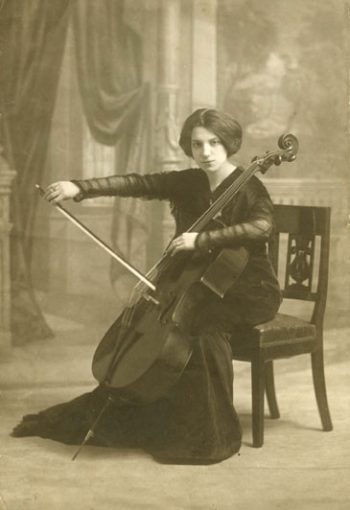 Guilhermina debuted by the age of seven and then spent most of her life touring Europe, gaining confidence and freedoms which, by the beginning of the 20th century, were still unthinkable to many. Living to the fullest, she is remembered not only as an excellent musician and teacher but also quite a character: a lady who had a soft spot for smoking a pipe, wearing big hats, and driving around the city in a noisy black car.

Guilhermina and her older sister Virginia were brought up in a family where music was omnipresent, and so both of them were attracted to the idea of playing an instrument early on. While the older sister’s choice had fallen on piano, the younger’s turned out to be far less conventional – at the age of five, Guilhermina asked her father, a professional musician, to teach her the cello. Augusto Suggia was more than pleased to fulfill his daughter’s wish, despite the instrument being bigger than the child and traditionally considered “masculine.”

Guilhermina turned out to be a natural talent. In less than two years she mastered the basics and soon, along with her sister, begun to perform publicly. Her first serious concert, given in Assembleia de Matosinhos, was a huge success. The audience couldn’t stop applauding and the following day all the local newspapers were gloating over the sisters’ astonishing performance. Yet it seems that, since the very beginning, it was Guilhermina who was winning all the attention.

“Dressed in blue, seated in a tiny chair, hugging her cello, she was reminiscent of an enchanting little doll. Her small hands strained to grasp strings,” O Jornal de Noticias wrote. “She smiled and played the bow as if she were playing in her bedroom with a toy. The movement of the bow was strong and secure, very admirable for an age at which the fingers lack the strength and agility that only study and practice will bring with time.”

Guilhermina practiced mercilessly and the efforts paid off quickly: by the age of 13, she was already a full member of the Orpheon Portuense Orchestra. The very same year, having heard about the concert that the famous Catalan cellist Pablo Casals was about to give in Espinho, Augusto Suggia – firmly convinced of his daughter’s remarkable talent – had arranged an audition for her. Even though at first Casals didn’t seem enthusiastic about the idea of becoming a tutor, after having heard the girl play, he immediately agreed. And so, throughout the whole summer, Suggia would once a week pack her cello and, accompanied by her proud father, catch a steam train to Espinho.

In March 1901, Guilhermina and Virginia received a remarkable invitation – they were about to perform for the royal family. Right after the concert, D. Amelia asked whether she could possibly help in fulfilling any of the girls’ dreams. Guilhermina, with disarming confidence, replied that she would wish to complete her education abroad. A couple of months later she received a generous scholarship and soon headed to Leipzig.

The cost of living abroad, however, was high, and so the whole family needed to work for Guilhermina’s success. The expectations were high and, for a brief moment, it seemed that the girl wouldn’t meet them — shortly after the auditions to the conservatory, Suggia was informed that her candidature was rejected. Fortunately, it turned out that the only reason it happened was that she was already too advanced. Seeing her talent and determination, Julius Klengel offered to teach her.

In less than a year, Suggia’s technique became impeccable and the new professor had to admit that there was nothing more he could do for her. In December 1902, he invited Guilhermina to perform with him in Gewandhaus. Thus, she became the youngest soloist who had ever played there and one of the very first women who had this privilege. That night, when the final note of the Volkmann’s cello concerto ended, the applause was so fervent that Suggia had to replay the entire piece. It was one more occurrence without precedence, especially under the rigid baton of Arthur Nikitsch, who believed that the program should never be interrupted.

After the concert in Leipzig, Suggia’s position in the art world was assured. She spent the following years touring, impressing everyone with both her skills and appearance. She loved performing and, as some used to joke, if she had not chosen to become a cellist, she would have become the world’s greatest actress. Yet, for the very same reason, she had only recorded a couple of pieces and these days they are collectors’ rarities.

By 1906, it seemed that there was only one cellist who could possibly compete with her: Pablo Casals. The two musicians met again in Paris and decided to play some concerts together. What was first just a professional arrangement soon turned into an official relationship. However, no matter how passionate, it didn’t last long — the couple broke up in 1914 and, shortly after, Suggia left for London.

The Portuguese cellist immediately immersed herself in the local culture, accompanied by such figures as Virginia Woolf and Dora Carrington. The prominent painter, Augustus John, immortalized her with an expressive portrait, which now belongs to Tate Gallery. Finally, she found a protector in Sir Edward Hudson, the founder of Country Life magazine, who had not only arranged her a practice room in his castle but also gifted a valuable 1717 Stradivarius.

And yet, by 1923, preoccupied with her parents’ health, Suggia moved back to Porto. As she used to say, “that’s where the home was, even if London was the world.”

Suggia came back to Portugal both as a source of national pride and a complete stranger — her house was full of English furniture and souvenirs brought from abroad, her clothes were voluminous and bright. She got married only in her 40s. And yet, despite all those eccentricities, she was admired for her big heart and dedication to the local culture. As if trying to pay off the debt of gratitude, Suggia dedicated herself to teaching, and this legacy continued long after her death. In 1950, two of her valuable instruments were sold to fund a scholarship for promising young cellists. One of its most famous recipients was Jacqueline du Pré, another child prodigy, who, just like Guilhermina Suggia, made a brilliant international career.