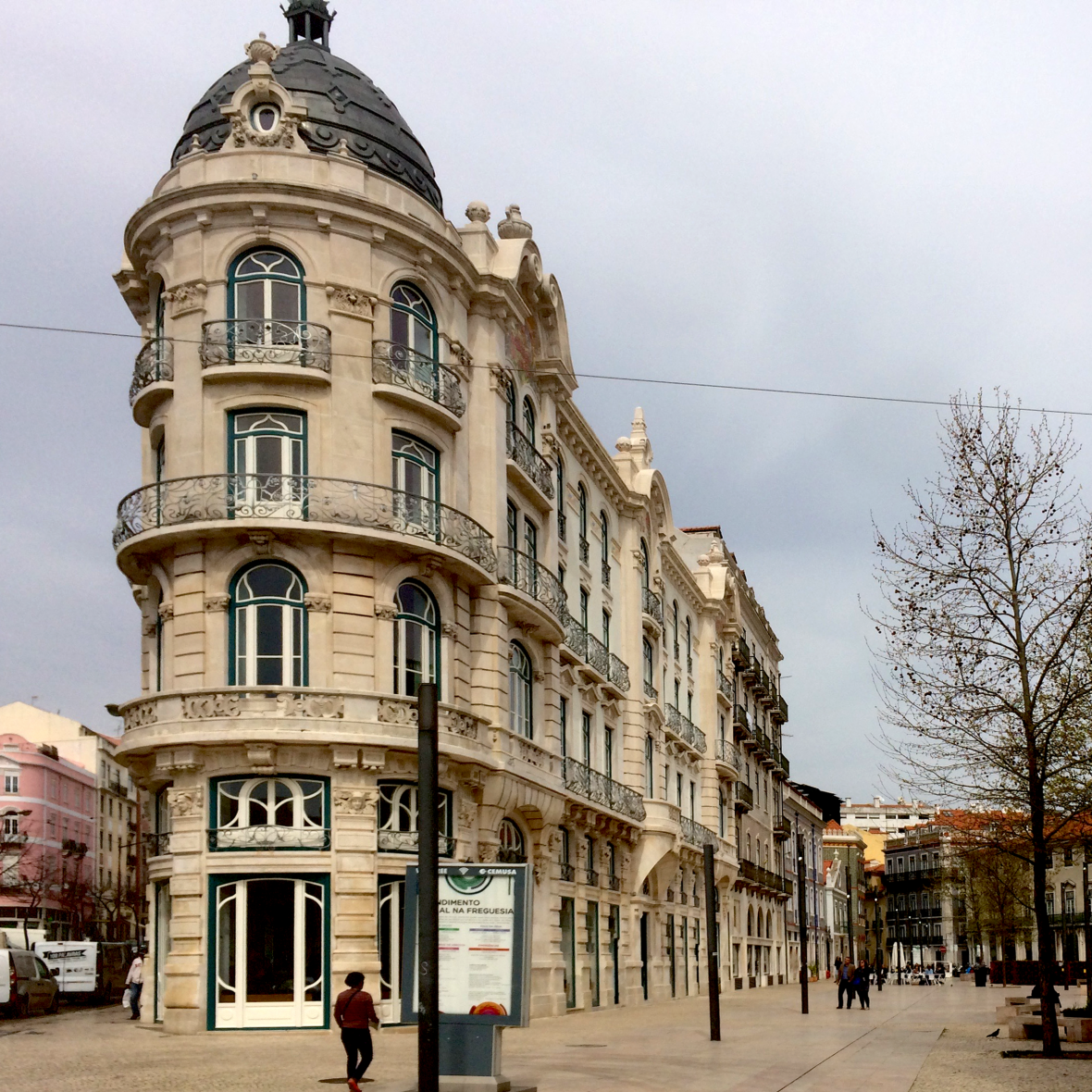 Intendente Part 2: Where the Tramps Dwell

Intendente takes little more than a minute to walk across, but each time its pulse can be felt within seconds, be it good or bad or both.

Since my first night there watching a silent Chaplin film accompanied by a live pianist, I have frequently visited and walked through Largo do Intendente, more commonly known as just Intendente. The area is relatively small. It’s tucked away six walking minutes north of the infamous Martim Moniz (and is about half its size) and before the Intendente metro station off of Avenida Almarante Reis.

At the south edge of the park, separating it from the main street, is a dome-shaped Art Nouveau building, designed in 1908. As is the way of the world, especially in such pristine locations, it was transformed into a luxury four-star hotel earlier this year, aptly named Hotel 1908 Lisboa.

Intendente takes little more than a minute to walk across, but it’s difficult to miss as it’s a wide-open space in an area otherwise cluttered by narrow streets, closely set buildings, and busy traffic. There’s always construction on one part or another, but it’s rarely intrusive. I would call the place a square rather than a park.

This nook has gone through some changes in recent years, morphing from an area of poverty, prostitution, and drugs into a hub of art, culture, cafés, four-star hotels, dance floors, vintage shops, and social standings of all sorts. The prostitutes still come out, but mostly at night. You will be asked for money any time of day if you don’t look Portuguese, and even if you do. The drug-dealing is now limited to scamming the occasional tourist and the atmosphere is usually safe and lively. Police presence is common, which prevented a friend of mine from doing their business one late night in January, but there are plenty of bathroom options during the day.

One of these bathroom options, day or night, should not be the curious red and green enclosing in the square’s center, next to an ancient fountain that still sometimes works. This iron bench/sculpture/garden is Kit Garden (also known as “The Love Seat”), created by well-known local Portuguese artist Joana Vasconcelos in 2012. I have seen this particular work of art used for various purposes other than sitting or loving, some more hygienic than others.

Personally, I’m not a huge fan, so I have yet to venture inside. But it is definitely a popular attraction and perhaps to Intendente what the Dragon or the free bathrooms are to Martim Moniz. In many ways, especially according to the locals, these two neighborhoods are close relatives in terms of recent development, popularity, and vibe, although more people sit on the floor in Martim Moniz.

Just across the street from “The Seat” are two of the finest venues this area has to offer, complete with official bathrooms. They differ in atmosphere, décor, and general crowd, but both are spacious and welcoming.

The name of the first is Casa Independente, which is a word combination I’ve heard in Lisbon on a daily basis, often quite far from Intendente itself. A raggedy flag made of a few dozen shreds of black fabric marks its entrance.

On the second floor inside are stages and decent-sized dance areas that often host local musical talent and other events. The place is big enough to feel like a maze; the first few times I ventured through, opening doors I wasn’t sure I was supposed to and pulling away curtains to dimly lit spaces, rooms just kept appearing, impressive in size and, more often than not, completely empty except for the band’s gear.

It smells of Brooklyn but —and this is rare for me — in a good way.

There is a nice cozy bar, with snacks, cocktails, young friendly bilingual staff, and fair prices. This bar leads to an outdoor garden area, with couches, chairs, tables, ashtrays, plants, books. It’s walled off but the sky is there. There are always several happy faces, local and otherwise, enjoying wine, friends, love interests. There’s a smaller bar* outside as well.

*Strange side-note: said bar used to house an ugly porcelain cat with an eyepatch, along with other trinkets of varying mystery. But some time last year this cat went missing; rumor has it that it was recently spotted in the house of a local gypsy woman.

Whatever the case, Casa Independente is a prolonged pit stop for many on long winter nights. With summer approaching and the face-lifting of Mouraria well under way, the prices will go up, but the atmosphere still feels laid-back and inviting. It smells of Brooklyn but —and this is rare for me — in a good way.

Right next door are a few inspiring and very well placed graffiti pieces. Above them is a large yellow banner announcing Sport Clube Intendente, another fun neighborhood staple. The banner has been there for at least a year, but its contents claim that the place is over 80 years old.

This is not difficult to imagine once inside. I have stepped foot here quite often, especially having learnt that there are pool tables. Each time I was greeted by a big friendly non-English-speaking bartender who may have been there from the very start. He usually has a big friendly buddy just hanging out, as opposed to swarms of customers; he is quick, courteous, and consistently generous with his whisky pour. Past the bar are three large adjacent rooms with windows facing and opening onto Largo do Intendente.

These windows are a good place to people-watch, in the “Love Seat” or elsewhere, and, I imagine, to experience an outdoor event — say, a screening of Chaplin’s Circus. The room to the left feels like a factory cafeteria, with a few tables and chairs and two mounted TV sets. Groups of younger locals usually smoke, drink, chit-chat, watch the game if it’s important or if they are bored with their friends and phones. The main room has two fully functional pool tables and a dart-board, which I’m sad to say is digital. I have yet to wait for an open pool table.

I come for the pool, the view, and the whisky pour.

The third and final room is the largest and the darkest, with a mysteriously ever-present DJ and an often empty dance area. It’s reminiscent of an Eastern European high-school gym discotheque in the 1990s. Billy Idol is a favorite. The venue hosts bands and various local events and can get crowded on the weekends but is usually free to enter. I come for the pool, the view, and the whisky pour.

Opposite the windows of Sport Clube, on the western edge of the square, there is a number of small beautifully tiled building façades. They are a fitting contrast and worthy counterpart to the graffiti nearby. The spaces are equally residential and commercial. Indoor/outdoor cafes on the bottom floors cater to the somewhat bigger fish in town; a lot of artisanal things go on inside.

One of these façades is aesthetically unique but somehow blends in. Instead of intricate tile patterns, it has flower pots, a monkey, and Asians on its walls. It is believed that these images have been here for over 150 years and represent Portugal’s trade with the East. The house is the property of the Viuva Lamego Ceramic Factory and functions as both a museum and a shop. It’s a great little building and I plan to go inside one day.

The same goes for A Vida Portuguesa next door. I have never been inside, possibly because of its name and the fact that it is advertised as a traditional vintage shop, or perhaps because of timing and mood. But it looks nice and is quite famous, from what I’ve gathered. Perhaps when I run out of soap and toothpaste, I’ll pick up the old-school Portuguese brands there and see what all the fuss is about.

Finally, directly across from the four-star hotel is Josephine’s bistro and bar, opened in 2014 and where the notes for this article were made, almost a year after my first beer here, with Charlie Chaplin. This is an unpretentious little food joint that stays quiet most of the day. It’s a great spot for creative work or a book, if you don’t mind sparing a cigarette or a coin now and then. I’ve never met the owner but have read that she’s French and not named Josephine. The menu has options, the staff is very friendly and often eats there, which is a good sign.

Largo do Intendente is obviously going through some changes, be they good or bad or both. The bathrooms will surely soon be “for customers only.”  These changes have been long underway: half a year ago I signed an anti-AirBn&B petition when asked by nice concerned locals. Nevertheless, this little square seems to encompass at least a hundred years of Portuguese history with its sound and color. It has a pulse that is difficult to locate but can be felt within seconds.

And it has many a good memory stored away for me. I have sat on a bench with a beautiful woman and also had my wallet stolen here. I have met and chatted with all sorts of characters; I played my first round of pool in Europe at Sport Clube. I still pull out my iPhone to awkwardly snap a picture from a new angle any time I walk through. I have been extremely fortunate to live a stone’s throw away from it most of my time in Lisbon. And, even though I no longer call Mouraria home, a longer walk won’t stop me from returning.