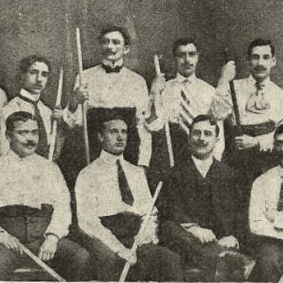 What do you get when you cross a 14th-century Portuguese dude? A stick to the face if you aren’t careful. You might want to keep your comments about his mustache to yourself. 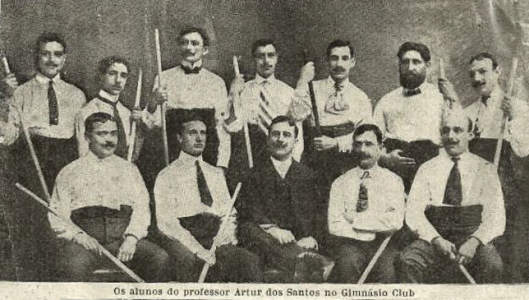 This unique Portuguese martial art, originally from areas surrounding the Minho river, was used in the violent resolution of disputes between villagers and during tournaments at local fairs. While certainly fun to watch, these contests were no laughing matter for the fighters. Those who practiced the art had no mercy towards opponents if they had more than a year of training, often hitting them with full force.

Suffice it to say these were dangerous displays of manhood that could end in serious injuries as well as a healthy bit of stone-throwing by female spectators. No, this was not the origin of baseball, so don’t get too excited.

The weapon in Jogo do Pau, or “Stick Game,” is known as a varapau or cajado — a large stick from 1.5 to 2 meters in length that is heavier and thicker at one end. The staff grants the user a large attack range with a circular, fluid technique that delivers strikes at high impact, capable of breaking bone or defending against edged weapons. Aside from offensive moves, fighters train against blows while lying on the ground and while seated, from single and multiple opponents.

There is no conclusive evidence that Jogo do Pau techniques were used in battle, but in the 14th century, the varapau was held valiantly by Portuguese hands against the steel swords of the Spanish in the Battle of Aljubarrota. Against overwhelming odds, the Portuguese kingdom won the fight with an army composed mainly of peasants wielding large sticks, through superior tactics (and wits, claro).

The word jogo can be traced to the action of throwing sticks or striking an opponent, but there is another meaning related to fencing as we see used in Jogo da Espada, the art of fencing with swords.  That being said, jogo seems to have more to do with weapons training rather than just a game… or just flinging a stick at someone.

In the beginning of the 19th century, several patrons of the martial art formed a Jogo do Pau school in Ginásio Real de Lisboa, a gym that was later named Ginásio Clube Português in 1875. During this time, the martial art was also called Esgrima Nacional, or National Fencing, and Esgrima Lusitana as a reference to the great epic of Luís de Camões, a Homeric poem focusing on the discovery of the sea route to India by the Portuguese.

Mestre Nuno Russo is one of the modern-day masters of Jogo do Pau and has created his own style called Escola do Santo Condestável, taught by his students in Cascais, the Algarve, and Porto. He has also introduced the use of the single stick and the shorter double stick technique and currently teaches at Ginásio Clube Português, among other places.

The use of two shorter sticks was integrated into Jogo do Pau in response to the growing urban environment, since a large staff was (shockingly) frowned upon in the city. Clearly, in the rural villages, this was less of a problem.

Techniques for the traditional single stick have been put to the test against various schools of other martial art disciplines and has had great success in the competitive arena. Most notably, the technique carried Carlos dos Santos to two European stick fighting championship titles and the first world title. Integrated into the modern era, Jogo do Pau has been adapted to modern combat sports and is now practiced with safety equipment to prevent injury from high-velocity sparring.